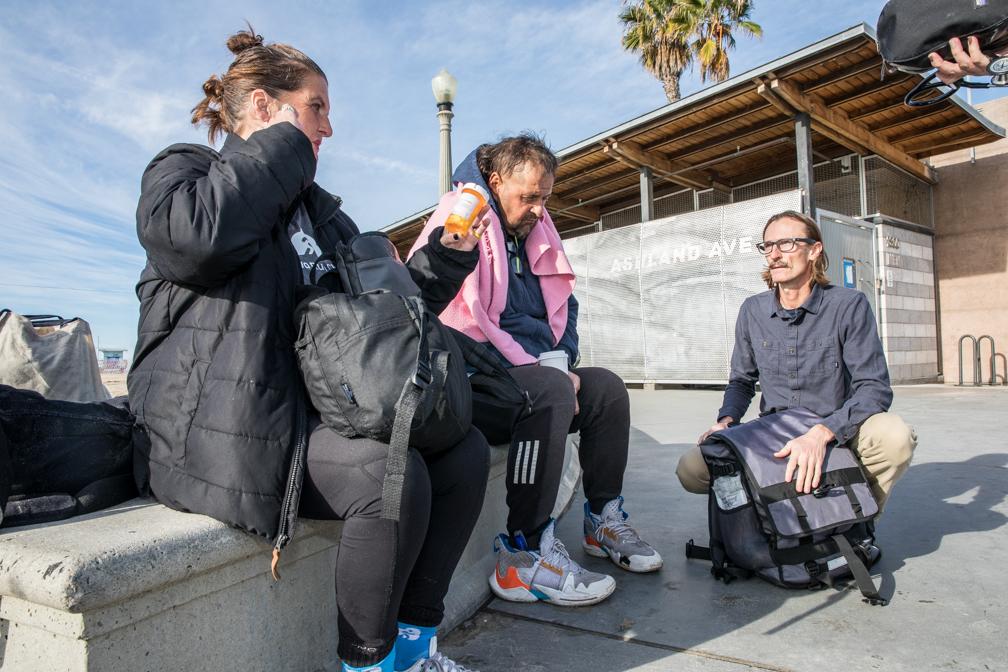 Cathleen Cooper was sleeping on the beach in Venice when a sound awakened her. She opened her eyes to see a man standing over her with a machete. Luckily he didn’t harm her. But the constant stress of living on the street – especially with her medical conditions – left her exhausted and hopeless.

Cathleen has a heart valve issue, which requires her to take anti-coagulant medication that puts her at risk of excessive bleeding when she is cut. She said a simple bump on the skin produces excessive bruising. She lived in continual fear of injury on the streets.

While living on the streets, Cathleen also suffered a serious arm injury when a car hit her as she crossed the street. She underwent extensive surgery but said she has not regained complete use of her hand.

Cathleen’s medical conditions made her eligible for Project Roomkey, a collaborative effort of the State, Los Angeles County and Los Angeles Homeless Services Authority to secure hotel and motel rooms for vulnerable people experiencing homelessness. It provides a way for people who don’t have a home to stay inside to prevent the spread of COVID-19 and to reduce hospitalizations.

Cathleen moved into a Project Roomkey motel room with her long-time partner, Rick, earlier this year, and said her life is much more peaceful now – no more machete-wielding wake-up calls. She said she’s better able to manage her medication and take care of her medical conditions now. She also said her stress level is much lower now that she’s in quieter surroundings.

Dr. Coley King, Venice Family Clinic director of homeless services, had treated Cathleen when she was living on the streets and visited with her again at the Project Roomkey site.

“You can see the difference in Cathleen,” he said. “She looks much less stressed and much happier and hopeful. Housing is health care, and Project Roomkey is helping us to get people off the streets and into shelter where they can better take care of themselves.”