Column: He died Sunday on a West L.A. sidewalk. He was homeless. He is part of an epidemic 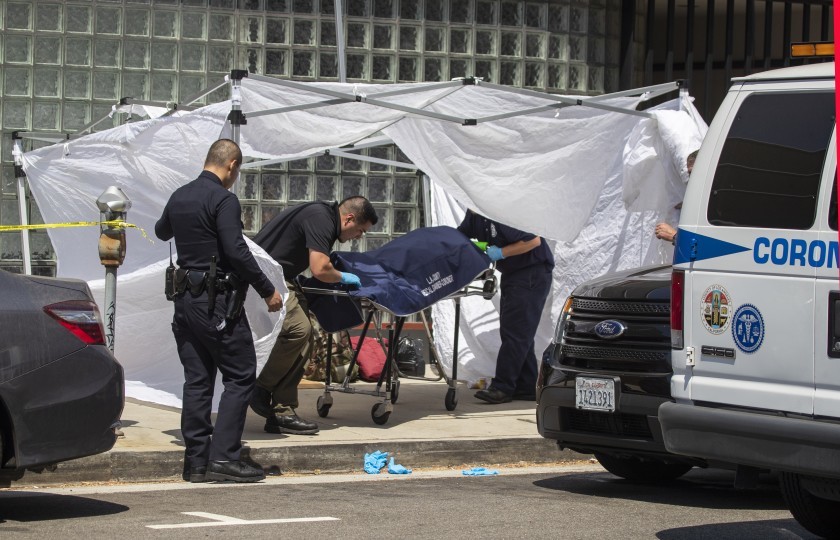 The balding, middle-aged man was facedown on a flattened piece of cardboard, arms at his side, a small pool of blood near his mouth. He wore bluejeans, his feet were bare, and headset buds were still in his ears.

Two LAPD officers who responded to the emergency call from a passerby had pitched a white pop-up tent around the body, which lay on the sidewalk of Massachusetts Avenue between Sepulveda Boulevard and the 405 Freeway in West Los Angeles.

It was Sunday morning, the middle of Labor Day weekend, three-quarters of the way into a year in which deaths of homeless people in Los Angeles County are on a record-setting pace to top 1,000, according to preliminary numbers from the county coroner.

“I hope this will be another wake-up call that urgency is the order of the day,” said County Supervisor Mark Ridley-Thomas, who called it incomprehensible and unacceptable that dying on the streets has become routine.

On average, nearly three homeless people are dying daily in the county, nearly double the rate of deaths by homicide. Illness, addiction, accidents, suicide and the ravages of being unsheltered are among the primary causes of death.

“We know the research says that people who are what’s called rough sleepers, those who are living on the streets and not in a shelter or a car, are 10 times more likely to die than the regular population,” said Dr. Susan Partovi, citing a study in Boston. Partovi has been administering to homeless people in Los Angeles for years.

The average age of the first 666 homeless people who died in L.A. County as of Aug. 25 was 51, well below the county’s average life expectancy of roughly 80. Homeless people are dying on sidewalks, along riverbeds, and in tents, parks, shelters, vehicles, motels and hospitals.

You can call it a travesty. An emergency. A call to action.

It is all those things.

Bodies are being found in virtually every corner of the county, a grim consequence of the intensifying epidemic of homelessness. In 2012, 407 homeless people died in L.A. County. The number has gone up sharply every year, to last year’s record high of 921.

This year, the toll hit 525 in just the first six months — 88 more than over the same period a year earlier — and the pace has been steady since then.

New York City has roughly the same number of homeless people as Los Angeles County, but has moved tens of thousands of them into shelters. Despite much harsher weather, New York recorded 292 homeless deaths in 2018, fewer than one-third the Los Angeles total.

“We’re seeing homeless deaths in areas where we didn’t see them five or 10 years ago,” said Brian Elias, chief of investigations for the county coroner’s office.

Elias’ boss, Chief Medical Examiner-Coroner Jonathan Lucas, said his office is stepping up its analysis of trend lines and causes of death to help address the crisis.

“We need to be taking this information and looping it back to the departments of mental health and public health, to the policymakers, the county supervisors, and present it in a way that can help inform their decisions,” said Lucas, adding that he’s passionate about what he considers a duty to the community.

The coroner’s office noted that the six-month increase in deaths over last year was roughly proportional to the increase in the total number of homeless people from a year earlier.

The first 666 deaths of the year included 42 homicides and 27 suicides. Males vastly outnumbered females, 83% to 17%, and the victims included 253 white people, 220 Latinos and 168 African Americans.

Substance abuse and heart conditions, sometimes in conjunction, were among the leading causes of death, but no cause had been determined in about 100 of the cases.

The coroner’s reports, filled with clinical language and dispassionate narratives, are ghostly sketches of social disorder, poverty, violence, addiction and isolation. They speak to a breakdown that extends beyond homelessness and reaches into our economy, our schools, our criminal justice and healthcare systems.

In a region of abundant wealth and world-class hospitals, people die penniless, they die in pain, they die alone.

On Jan. 1, a 37-year-old African American woman died at Providence St. Joseph Medical Center in Burbank after being found unresponsive a day earlier on a sidewalk in North Hollywood, one week after giving birth to a girl. The woman had a history of asthma and substance abuse. On her left arm was an “RIP” tattoo.

On Jan. 20, a security guard noticed a man sitting awkwardly, with an open beer at his side, near a business on Telstar Avenue in El Monte. The guard touched the man, got no response and dialed 911. Paramedics pronounced the 71-year-old white man dead at the scene.

On Feb. 6, a 27-year-old Latino male with a history of depression died on Foothill Boulevard, west of Osborne Street, in Pacoima. According to the coroner’s report, the young man had attempted suicide a week earlier and was placed on psychiatric hold.

At 8:45 p.m. on the 6th, says the coroner’s report, the man’s “father heard the decedent moving around outside their tent. He heard a gasp of air but did not check. 10 minutes later the decedent’s father went outside of their tent and found the decedent hanging from a tree. He cut the decedent down.”

In the case of the man who died Sunday in West Los Angeles, I arrived on the scene at the same time as coroner’s investigator Adrian Munoz, 29.

He sized up the scene. No drug paraphernalia was visible. There were no obvious signs of struggle. Munoz ran his gloved hands over the man’s head, feeling for evidence of trauma. He found nothing.

Los Angeles Police Officers Jeff Duarte and Ray Leung told me there were a lot of homeless people in the area, most of them veterans who get services at the nearby Veterans Affairs campus.

The victim, who was African American, appeared to have been traveling lightly. No shopping cart filled with belongings. No tent or tarps. Just a red sleeping bag, his backpack and a few Budweiser tallboys he never got to.

Munoz performed his duty with an air of respect, taking care in offering this one last service to a fellow human being. He crouched, laid his hands under the man and turned him onto his back. The man’s mouth was bloody. His gray eyes aimed skyward, in the direction of wispy clouds and sunstruck palms.

Munoz checked inside the man’s mouth for signs of trauma. Nothing there. He lifted the man’s shirt, examined his torso.

“A scar in the middle of his chest,” Munoz said. A possible heart procedure.

Munoz laid a clear plastic sheet over the man, then placed a white sheet on top of that.

In the man’s wallet, Munoz found a driver’s license, a bank card and a state medical benefits card. In the backpack, he found a little blue packet of Alka-Seltzer, several pairs of fresh socks and some medicine vials. It appeared that the man had been a patient at the Venice Family Clinic. Those details should help the coroner’s office in the next phase of its investigation: trying to determine who the man was, how he ended up alone and dead on this stretch of sidewalk, and whether he has family to notify.

Only a few days earlier, I had spoken to Carrie Kowalski, a physician assistant at the clinic. On her street medicine rounds, she had told me, she sees every conceivable malady and a lot of addiction. A common theme among her patients, she said, is that “something went wrong from childhood and started someone on a path” to physical, mental and addiction issues.

“It can be physical violence, abuse in the foster care system, sexual abuse, the experience of veterans, and you become homeless and now you’ve got more trauma,” Kowalski said. “You get hit by a car or you get raped and you get beaten. Your stuff is stolen and it becomes this huge mess, and it snowballs.”

As does the death count.

Ridley-Thomas recently called for creating enough shelter and housing for everyone, and imposing a requirement that homeless people come indoors.

Those are big, expensive, difficult challenges. But losing ground, as we currently are, is not acceptable, Ridley-Thomas said. We need more psychiatric emergency services, more addiction rehab and more recuperative care so that homeless patients don’t go from hospitals straight back to the streets.

“I got to get off the streets,” said a homeless guy named Adam.

A van from the coroner’s office pulled up to Massachusetts Avenue about 12:30 p.m. and Munoz helped the driver lift the body into the vehicle.

The day was young as the van headed to the morgue, but the man was already the third homeless person to die on Sunday.