Physician comes home to give back to her community 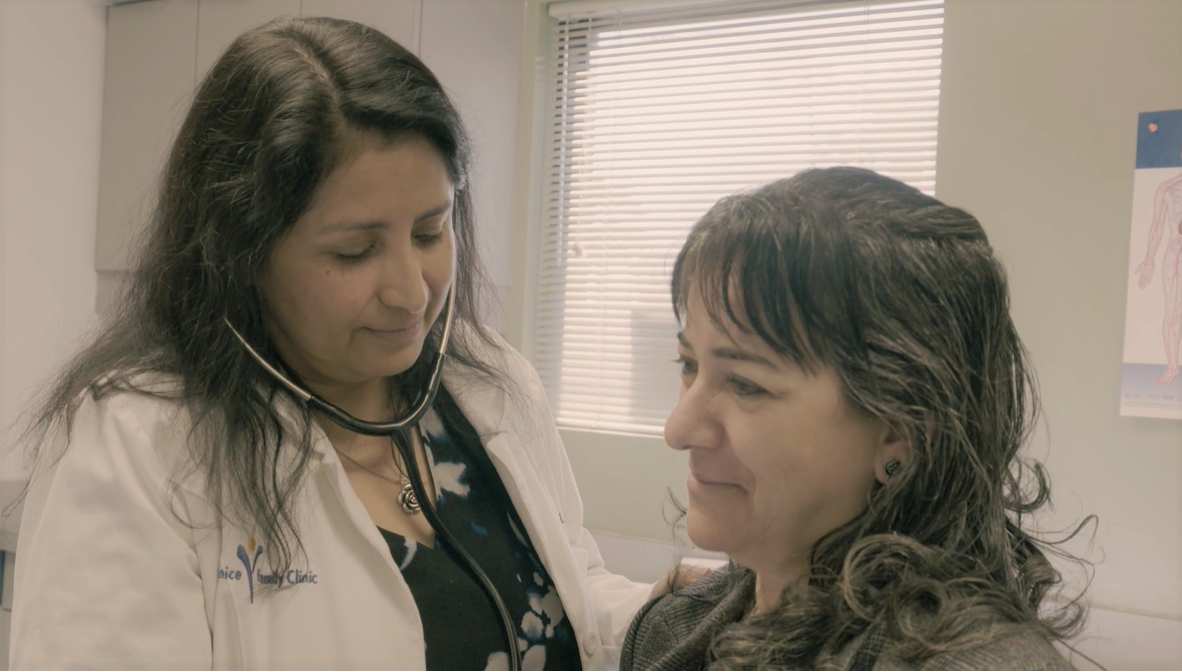 She didn’t set out to make a difference, but her work has inspired us all the same.

Dr. Margarita Loeza went from being a patient at Venice Family Clinic to being a physician there, helping to make families just like the one she came from healthier.

“I always said I was going to give back to my community, to help reduce health inequities and disparities,” she said. “I grew up in the area and had friends who lived in the Mar Vista Gardens housing project. I think of them and the Clinic’s teen patients at Culver City and Santa Monica high schools. Many don’t have health insurance. People think the Westside is wealthy, but there’s a group of really poor kids and a group of rich kids, and not much in the middle. The poor kids need health care, too.”

It’s this kind of dedication to the health and well-being of families, many of them ethnic minorities, that earned Loeza a place on Venice Family Clinic’s Visionaries list in honor of the Clinic’s 50th anniversary.

Loeza grew up on the Westside of Los Angeles in a large family living in a one-bedroom house. Her mother cleaned houses, and her father was a gardener. Her mother took her and her siblings to Venice Family Clinic for their medical care when the Clinic was still housed in a storefront dental office on Lincoln Boulevard. She fondly remembers going to our Children’s Holiday Movie event, which treats the Clinic’s pediatric patients and their families to a private screening of a new feature film, holiday entertainment and gift bags of toys and books.

Born with congenital hip dysplasia, Loeza spent much of her childhood in and out of braces, casts and surgeries, and doctors’ offices and hospitals.

Venice Family Clinic was Loeza’s medical home until she went off to attend Occidental College. And after graduation, she came back as a volunteer clinic assistant before going to medical school at the University of California, San Diego. Eventually, she joined the medical staff as a family physician, and is now also the Clinic’s chief medical information officer.

“I work at Venice Family Clinic because it serves the population that I’m originally from: the under- or uninsured,” said Loeza. “We need more doctors who look like our patients. Our black patients need black doctors, our Latino patients need Latino doctors. It’s not just that someone can speak the same language, but it’s understanding the culture, too.”

She described a phone visit she recently had with a patient who was experiencing symptoms consistent with COVID-19. As she asked the patient about her life and steps she was taking to minimize exposure and spread of the virus, Loeza realized the patient was embarrassed because she was poor.

“She opened up once I told her that I grew up in one-bedroom house with six other people, so I understood what it was like,” Loeza said. “It might not dawn on someone else who didn’t grow up that way. But if you did, you could understand why they’re not sheltering in place. They can’t shop online as easily because you can’t use EBT cards online. Sheltering in place is for those who can afford it.”

Supporting the next generation

To encourage and support aspiring Latino health care workers, Loeza co-founded MiMentor, a nonprofit that offers mentoring to undergraduate students from low-income families interested in becoming doctors, nurses and pharmacists, among other professions. She also serves on the executive board of the Latino Physicians of California; as faculty advisor for UCLA Flying Samaritans, which provides volunteer medical care in rural border towns outside Tijuana, Mexico; and as a volunteer at Homeboy Industries performing laser tattoo removal.

One of her mentors is David Hayes-Bautista, whom Loeza first met as a medical student when he gave a guest lecture at her school. Hayes-Bautista, a professor of public health and medicine, and director of the Center for the Study of Latino Health and Culture at UCLA, is committed to reducing health disparities in vulnerable communities.

“The lecture he gave that day was on why it was great to be Latino, which was the opposite of what I had always heard when I was young,” she said. “He was the first Latino PhD I had ever met. He really is the mentor to all the mentors.

“Growing up, the only people who looked like me worked in the cafeteria or in maintenance, and it was the same in medical school and at the hospital I worked at. Even now I’m usually the only Latina in the room in professional settings,” Loeza said. “There’s one student I mentor now who said I was the first Latina doctor they had ever seen. That’s crazy – it’s 2020! When you go somewhere and nobody looks like you, it’s a way of saying you don’t belong without saying it. I want to change that.”