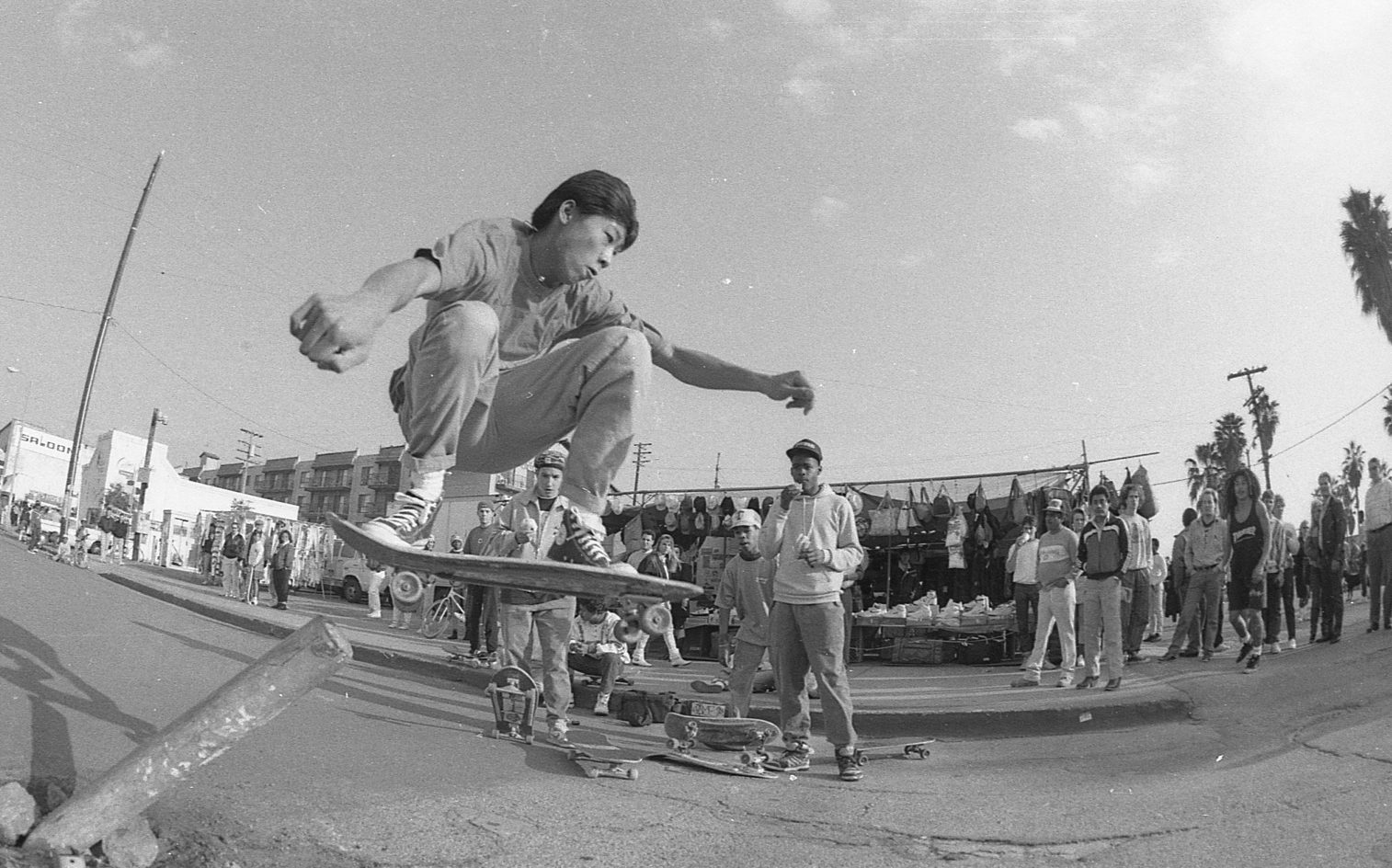 It was a sunny afternoon on Windward Avenue in Venice, just a stone’s throw away from the beach, and everyone had stopped to watch this one teenager as he skateboarded up and over a bent pole. The teen, Joey Tran-Vo, had a style usually reserved for skaters much older and honed over years of practice. It’s no wonder that the people around him – a man in a suit, a woman in mid-stride, a family of five on vacation, fellow skaters just about to take a bite of a snack – all turned their heads to bear witness. And as Tran-Vo made his way across and off the pole, 19-year-old Josh “Bagel” Klassman was there to capture the mid-air moment.

“That’s one of the best skate shots I ever took,” said Klassman, who donated the photograph Joey Tran-Vo, 1989, to this year’s Venice Family Clinic Art Walk & Auction. “His feet are perfect, his hair is perfect, he has perfect style, and the diversity in the background is great. It’s one of those photos that tells a story with the people, the shops, the boardwalk and Windward Avenue. It represents everything about that scene at that time.”

Growing up in Venice in the 1970s and 1980s, Klassman and his friends, including people who became some of the most well-known skateboarders in the world, spent their days hanging out on and around the boardwalk, skateboarding and surfing. This was the Venice known as the Ghetto by the Sea, a low-income area home to a counterculture created by a racially diverse group of young people, long before movies were made about it and skateboarding became enshrined in a multimillion-dollar skate park at Venice Beach.

“Now people look at my photos in a historical way, but I had no game plan for that. They were just photos I was taking,” said Klassman, who played with Instamatic cameras as a small child until his mother bought him the Nikon he still uses to this day. “These photos sat for like 30 years before people started recognizing them as meaning something. I didn’t even want to be a skate photographer – my friends were just some of the best skaters at the time.”

Klassman, whose nickname “Bagel” has stuck with him even though it originally was a not-so-nice nod to his Jewish heritage, said that he appreciates how people have taken to these unintentional works of art.

“The biggest compliment I get is when people tell me that these photos look very personal,” he said. “That’s because they are. Even the graffiti in the background are my friends’ names on those walls. I get excited about other people’s photos, so it’s humbling when people do that with mine.”

He still lives in the neighborhood in the same apartment for the past 25 years (“I can walk to the beach where people from other parts of the world plan vacations. I’m very lucky.”), and is definitely part of the fabric of Venice. So much so that Klassman, who works as a stage manager for large-scale concerts and events such as Electric Daisy Carnival, has been a patient of Venice Family Clinic – another mainstay of the community – for the past decade. He credits the care he has received from the Clinic for helping him get on a healthy, consistent schedule for check-ups and other preventive care, something he said he wasn’t that good about before.

So in 2015, when Klassman’s friend and fellow photographer Jens Lucking suggested he donate one of his pieces to Venice Art Walk, it was a natural fit, especially because Klassman remembered that his grandparents, Sy and Anita Katz, had helped fundraise for the Clinic throughout the 1980s and 1990s. For his first Venice Art Walk donation, Klassman gave one of his photos he took of renowned skateboarder, Jay Adams.

“Art is a huge part of the Venice identity. And Venice Family Clinic is the community’s clinic, a place that will help people out who can’t afford it, and that’s major. The art and health care communities coming together feels like a no-brainer.

“It’s always cool to be involved in fundraisers with what you have. If you don’t have a bunch of money, you can donate something that can raise money.”