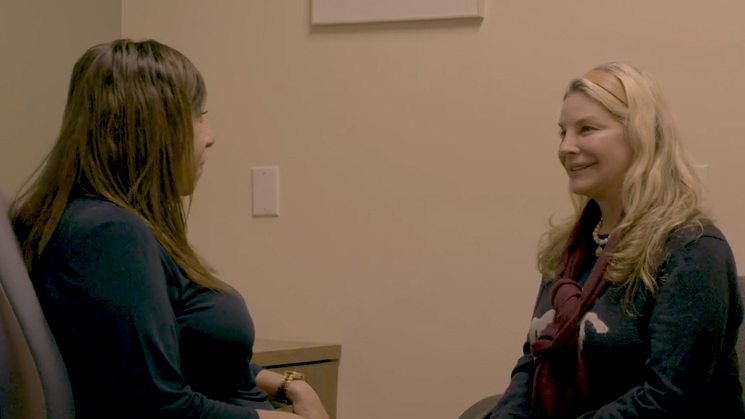 Brendi Blackburn was a producer in the entertainment industry. On the outside, she lived a glamorous life. On the inside, she was in agony.

Her boyfriend at the time, someone she describes as extremely famous and well-connected, abused her and isolated her from friends and family. She became depressed and fearful. She stopped working and mostly stayed at home. On the rare occasions she did venture out, she dressed as a man to avoid being recognized by anyone who might tell her boyfriend they saw her.

She tried to get help from therapists, but she still felt stuck. Then she found Venice Family Clinic’s domestic violence program, part of its behavioral health services.

“Coming here changed my life around,” Blackburn said. “Whenever I come in to the Clinic, I feel more empowered. I have my home here. I feel safe, and everybody is friendly and kind. There are a lot of women here who understand you. At that time in my life, I needed to be around women who cared, and that’s what I got. I needed something a little more special.”

One of these women is Gloria Hernandez, a domestic violence counselor whose personal lived experience with domestic violence resonated with Blackburn. Prior to joining the staff at the Clinic, Hernandez was the victim of abuse at home; it had gotten so violent that she lost a baby when she was more than six months pregnant.

“Being in a domestic violence situation, you’re very isolated. You’re controlled,” Hernandez said. “Because our program is within the medical Clinic, women feel safe coming here. They could say they were going to a doctor’s appointment instead.”

At first Blackburn attended group counseling sessions, but she found that meeting one-on-one with Hernandez worked better for her.

“Gloria has a way about her. She’s a strong woman. She has a way of getting you to say, I can do this,” said Blackburn, who has been seeing Hernandez for a decade, even after she separated herself from her abuser.

After an incident in which her boyfriend vandalized her car, Blackburn called Hernandez.

“That’s when I called Gloria and said, if I had walked outside when he was there, that would have been my face instead. That was a pivotal time,” Blackburn said. “Gloria gave me the tools to get out. I got the strength to get out of the relationship, got a restraining order, and moved on with my life.”

Blackburn no longer hides in the shadows. She now owns her own business doing something she loves: working with pets.