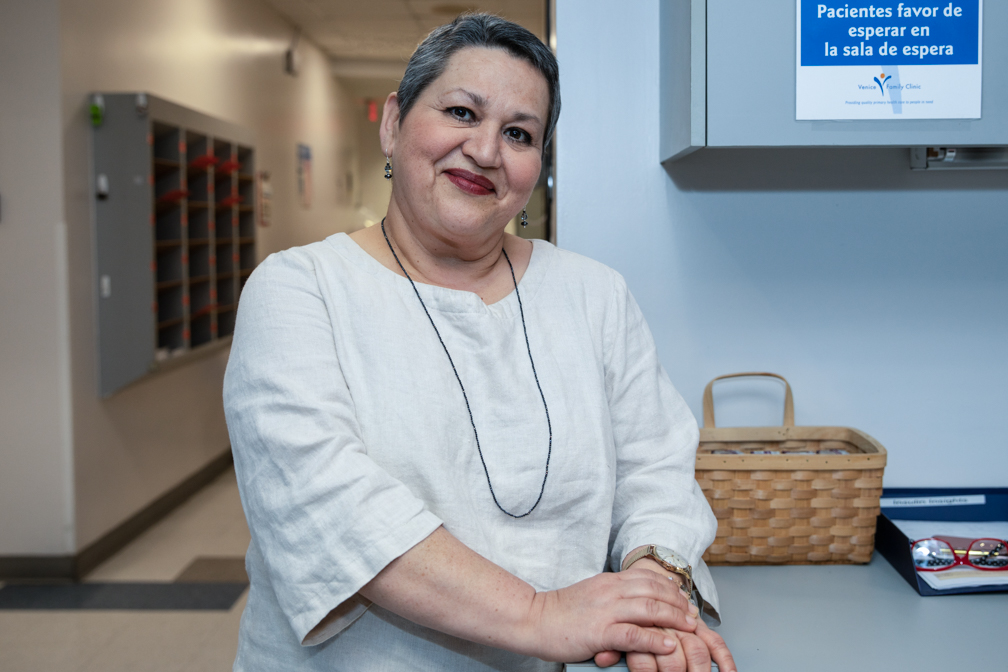 Though Judy de la Torre officially began her relationship with Venice Family Clinic as a volunteer, she always has been a part of the Clinic’s community.

“It feels great to work for a clinic that works for the community,” said de la Torre, a registered nurse. “When I’m at the market, people greet me, recognizing me from Venice Family Clinic. When I’m out walking, people know me and say hi. I’m happy they like me and don’t ignore me!”

This kind of connection with patients and community members beyond Clinic walls is what has inspired those she works with and why she has been named one of Venice Family Clinic’s 50 Visionaries in honor of the Clinic’s 50th anniversary.

“Judy’s dedication to her work, to patient care and to the Clinic’s place in the community is truly inspiring,” said Chief Medical Officer Despina Kayichian. “Her years of experience at all levels of the Clinic’s operations is invaluable, and she motivates her team every day with her drive and sense of humor, which helps keeps us all going.”

De la Torre’s first encounter with Venice Family Clinic was as a college student. Her father had been sick for a while – for days, he would come home from his factory job and slump down on the sofa with a fever. Her parents were immigrants who worked in low-paying jobs that didn’t offer health insurance, so de la Torre wasn’t sure where to go for help. A friend suggested she take her father to Venice Family Clinic.

There, she helped translate for the doctor, who diagnosed her father with pneumonia and put him on a path to recovery. De la Torre was so grateful that she asked the doctor how she could help. Because she had been so helpful translating English and Spanish, the doctor suggested she volunteer her time to helping other doctors and patients communicate. And that’s how de la Torre began her career at the Clinic: as a volunteer translator.

While earning a degree in business at nearby Loyola Marymount University, de la Torre volunteered once a week at the Clinic in the evenings. After she graduated and got a job in human resources at UCLA, de la Torre continued volunteering at the Clinic, working her way up to clinic assistant, taking patient vitals during appointments.

After a few years working in HR at UCLA, de la Torre saw a job opening at Venice Family Clinic for an administrative assistant and applied. She got the job, but she didn’t stop volunteering, continuing to spend her evenings helping patients and medical staff. De la Torre then became Venice Family Clinic’s volunteer coordinator in charge of scheduling the Clinic’s many volunteer doctors.

Though she had studied business in school, de la Torre realized she was “very much a people person” after spending so much time at the Clinic and decided to become a nurse. Through sheer determination, de la Torre continued to work full time while also going to the Los Angeles County School of Nursing, and two years later, she became a registered nurse.

“I always wanted to be a Venice Family Clinic nurse,” she said. “But when I finally became a nurse, the Clinic didn’t have a nursing job open.”

But de la Torre didn’t have to wait long. After working at UCLA as a nurse in outpatient recovery for about six months, de la Torre realized her dream of working as a nurse at Venice Family Clinic in 1996.

Today, de la Torre is the nursing manager in charge of supervising all the registered nurses and licensed vocational nurses. She even still continues to pitch in on the floor when her team needs an extra set of hands, helping to deal with everything from emergencies to administering vaccines to babies.

“I really enjoy interacting with people. By connecting with the patients we serve, I feel like I’m taking care of my own family and my community,” de la Torre said. “When I was younger and thinking about my role in life, I wanted to have a job where I could feel like I’m serving, giving back and gratified from my daily work, and I found that in the Clinic. And I plan to be here forever – when I retire, I plan to volunteer and do what I did when I first started.”