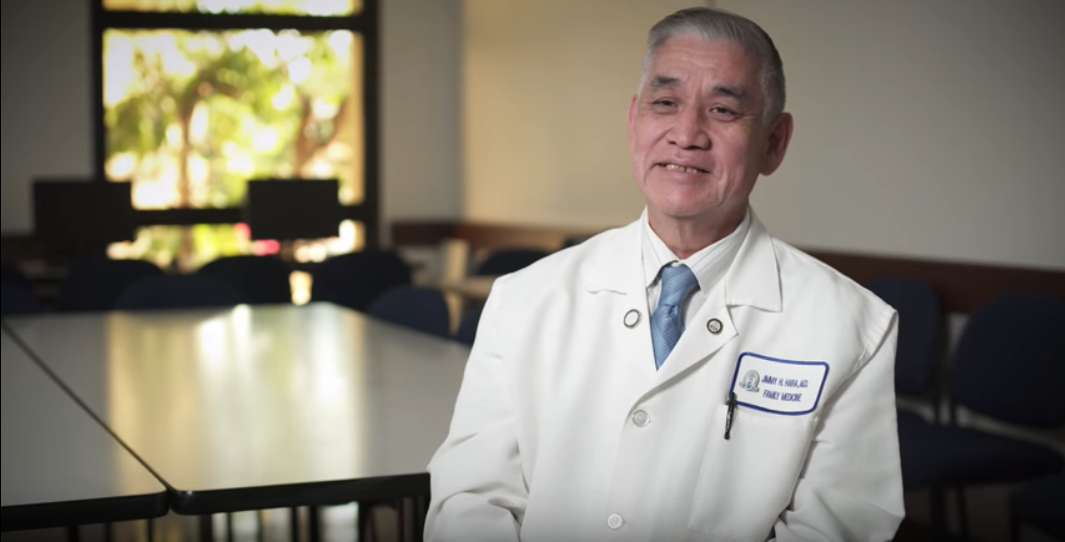 Dr. Jimmy Hara embodies the spirit of volunteerism more than most. As one of the longest-serving volunteers at Venice Family Clinic – he has been donating his time and expertise in internal and family medicine to the Clinic since 1971 – Hara has demonstrated an enduring commitment to community health.

“The very reason I decided to go to medical school was to serve my fellow human beings,” he said. “A community is only as strong as its weakest link. I believe strongly in the concept of a safety net. Every human being on this planet deserves the best quality food, shelter, and health care.”

This belief in serving everyone, especially those less fortunate than himself, is what has driven Hara’s interest in doing all he can to provide quality medical care to those who need it most. As a physician at Kaiser Permanente in Inglewood and later as director of the family medicine residency training program at Kaiser Permanente Los Angeles Medical Center, Hara began a tradition of bringing medical students and residents with him on the Tuesday nights he volunteered at Venice Family Clinic. That tradition would become part of the community medicine rotation at Kaiser.

“At the end of my day on Tuesdays, I would go to Venice Family Clinic,” he said. “And the residents who were assigned to me usually wanted to join. So I took them with me. It became known as Kaiser Night at the Clinic. I would take my residents, the obstetrical interns, all of the USC and UCLA medical students there in clerkships with me. At any given time, I would have about a half-dozen medical students working with me.”

For his role in championing a dedication to community health among young doctors and for bringing that medical expertise to the Clinic, Hara has been named one of Venice Family Clinic’s 50 Visionaries in honor of the Clinic’s 50th anniversary.

And today, even though he retired from Kaiser about seven years ago, Hara still volunteers his time seeing patients at Venice Family Clinic.

Moved to do more

Hara was born in a World War II Japanese internment camp and resettled in South Los Angeles after his family’s release.

“When I was growing up, the Japanese were only allowed to live in certain parts of LA,” he said. “I felt that things were not fair. I wanted to try to make things better for not only myself and Japanese Americans, but everyone.”

As an undergraduate, he attended UCLA, where he was involved in the free speech movement led by political activist Angela Davis in the mid-1960s. He then went to medical school at the University of California, San Francisco, during the height of the civil rights movement. While there, he volunteered as a medical student at the Haight Ashbury Free Clinics, getting his first taste of working in a community health setting. When he returned to Los Angeles, he began his residency at the Veterans Affairs hospital  and started volunteering at Venice Family Clinic, when it was in its infancy operating out of a store-front dental office after hours.

“I’ve always had this commitment to communities that need people who can provide services,” said Hara, who has also volunteered at the Los Angeles Free Clinic (which is now known as the Saban Community Clinic) and the Kedren Community Health Center in South Los Angeles. “Someone has to provide the safety net for the many individuals who are either uninsured, or I think the greatest tragedy, those who are working very hard but don’t get any health insurance benefits.”

In addition to practicing medicine, for decades Hara has held faculty positions at the David Geffen School of Medicine at UCLA and Charles R. Drew University of Medicine and Science, where he helped develop the family medicine residency program just two years ago. Outside of medicine, Hara has held leadership roles with Physicians for Social Responsibility, the Albert Schweitzer Fellowship, and is the first and only doctor serving as a commissioner for the Los Angeles Fire Department (appointed by his patient, Mayor Eric Garcetti).

“He cares about patients. I think that’s what draws people to him,” said Dr. David Carlisle, who volunteers at Venice Family Clinic and is president and CEO of Charles R. Drew University of Medicine and Science. “It’s not just his knowledge base but how he is able to apply that knowledge and work with individuals to make their lives better.”

To Hara, his work has always been about others, not himself.

“I think my generation of physicians saw medicine as a calling, and not just a way to make money,” Hara said. “Hopefully, I try to nurture that – what it was that led people to consider medicine as a career, and help them realize that continuing on with this type of health care is important.”