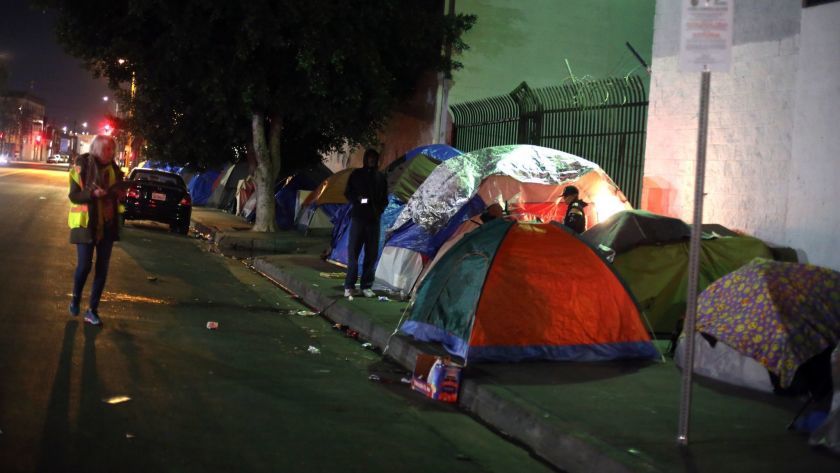 Up to now, President Trump’s interest in the Los Angeles homelessness crisis has been more rhetoric than action, and it’s unclear whether a visit by members of his administration this week — or by Trump himself next Wednesday — will lead to substantive new policies.

Indeed, the president’s attacks on the city’s homelessness problems have been met with more skepticism than interest in many corners of California, with critics saying he simply wants to use the issue of urban woes as a 2020 campaign wedge issue.

But one Trump advisor insists the president sees L.A. as a serious test case.

Former New York City Mayor Rudolph W. Giuliani, who in addition to representing Trump during the Russia investigation has advised him on other matters, said he has spoken with the president about homelessness in recent months.

“He’s been bombarded with complaints. I wouldn’t say just Los Angeles. It’s a nationwide problem. It’s coming back in New York quite quickly, which he’s also noticed,” Giuliani told The Times on Thursday.

Giuliani reckoned with homelessness in New York when he was mayor, and sometimes faced criticism for heavy-handed tactics.

“They thought I was being mean to them. I thought they were being mean by ignoring it,” Giuliani said.

There are limits to what the federal government can do, and it’s not easy to force people off the street, he said. One challenge, he said, is making sure shelters have the resources they need, otherwise people won’t want to stay there.

“It doesn’t have to be the Plaza Hotel or the Astor. But it has to be a nice place. Maybe even more critical, there have to be services there,” Giuliani said.

Los Angeles, a major metropolitan area with one of the largest unsheltered homeless populations in the country, is a good place to focus on the issue, Giuliani said.

“If something works in Los Angeles, it will work anywhere else,” he said. “[Trump] sees these cities as having horribly deteriorated. There’s a great frustration with it.”

Giuliani said the administration has been working on homelessness issues for several months, and he’s talked with staff about policy ideas. But he was was vague about what specifics were under consideration and said nothing is final yet: “The federal government can’t really solve the problem, but they can help.”

Unlike L.A. and other cities in California, New York City has a legal right-to-shelter policy, which requires government officials to offer a bed to any homeless person who requests one. The policy came about in 1981, two years after it was sued for turning away a man from a homeless shelter because of a lack of space.

Los Angeles County Supervisor Mark Ridley-Thomas and Sacramento Mayor Darrell Steinberg, co-chairs of Gov. Gavin Newsom’s Homeless and Supportive Housing Advisory Task Force, have said they want California to enact a legal “right to shelter” as well. The proposal has been met with a mixed response.

In a tweet Thursday, Giuliani praised Mayor Eric Garcetti, a Democrat, and signaled a willingness to work with local officials on homelessness. “It’s a problem that must, and can, be solved by local governments. But the federal government can be a big help. I congratulate [Garcetti] on being open to a constructive program.”

For many advocates for the homeless, the answer is clear: In order to get people off the street, there need to be more dollars devoted to building housing.

Temporary shelter beds are important, but advocates and government officials say that these beds will only move people into dingy, overpriced facilities and not solve the problem. That spending needs to be paired with investments in more durable permanent housing and an expansion of programs like Section 8 — which aids low-income renters.

This week, the state Legislature approved a bill that would ban landlords from rejecting prospective tenants solely because they hold federal Section 8 housing vouchers.

“Everybody is really focused on temporary shelter being the answer, but I think it’s important to keep people focused on the fact that we need to house people,” said Los Angeles Homeless Services Authority Executive Director Peter Lynn.

“We need to grow all programs at once and the federal government can put more money into strong housing programs. We need to keep pushing them as hard as they can. Their best tools are the housing tools.”

In a letter released Tuesday, Garcetti cited some actions the federal government could take that would help, including supporting the passage of several bills in Congress.

One is sponsored by Trump nemesis Rep. Maxine Waters (D-Los Angeles), who is the chairwoman of the House Financial Services Committee, and it would allot nearly $14 billion for programs to help get people off the streets. About $5 billion would go to support the building of shelters, while much of the rest would go to funding more housing for poor people.

Another policy the Garcetti letter cites proposed rules from the U.S. Department of Housing and Urban Development that would affect how undocumented immigrants access public housing or public benefits.

Venice Family Clinic Chief Executive Officer Elizabeth Benson Forer met with one of the Trump officials — Rear Adm. Susan Orsega, the chief nurse officer of the U.S. Public Health Service, who was representing the Department of Health and Human Services.

Forer told Orsega that these rules would have a catastrophic effect on her organization’s clients, some of whom are already on the verge of having to live on the streets. Forer said that Orsega wanted to understand how medical professionals could help Forer’s team if that sort of federal assistance were offered.

Forer’s team helps 27,000 people a year, about 4,500 of whom are homeless. Like others, she said where the federal government could help the most is by building more housing.

“There’s a health care crisis on the streets,” she said. “We need more federal funding to scale housing.”