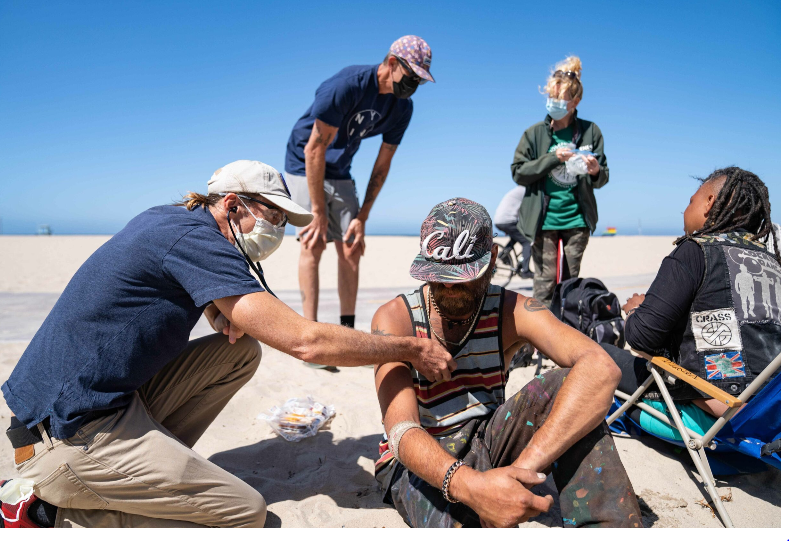 Circling the streets of East Los Angeles in their red family minivan, physician assistants Brett and Corinne Feldman find their patient where they thought he would be: crumpled on a bus stop bench in Monterey Park. The Feldmans, who lead the street medicine team at the University of Southern California, kneel in front of Johnny in “servant’s pose,” placing him in control of the interaction as they examine a burn that seared his cheeks and knuckles the color of summer strawberries. Johnny’s gout medicine makes his skin light sensitive, and he lives outside, with little respite from the Los Angeles sun.

“The new skin coming in, it’s like baby skin,” Corinne Feldman says. “It’s going to burn really easily. That’s why we wrap it.”

Johnny offers his hands and wrists for fresh bandages. “Did you want to talk to Corinne about quitting smoking?” nurse Dulce Barajas asks. “No!” he says, refusing the bait. So the Feldmans prescribe an antibiotic and question him about his access to food, water, bathrooms and even his ability to sleep lying down (sleeping upright leads to limb swelling), hoping to update their understanding of his living conditions and what factors will continue to hinder his treatment. Then they change his shoes for a new pair, arrange a follow-up appointment — Monday, same bus stop — and drive away.

Street medicine originated on the East Coast in the early 1990s; today, street teams treat the homeless from Brazil to Russia. In California the programs are now widespread, but current state health care law is preventing teams from treating their patients, street medics say, even as California’s homeless population grows past 160,000.

The Street Medicine Act (AB-369), a new bill under debate in the California State Senate, tries to remove those barriers. It seeks recognition of the street as a legitimate place to deliver medical care, a place where patients can bill Medi-Cal and access benefits like X-rays, lab work and specialized treatment just as they would in a doctor’s office.

“We create laws and systems with an expectation that people meet the government where the government is,” says state Sen. Sydney Kamlager. Kamlager introduced the bill as an assemblymember before winning a Mar. 2 special election to represent District 30 in Los Angeles, the seat vacated by L.A.’s new county supervisor, Holly Mitchell.

“This is an opportunity to meet people where they are,” says Kamlager. “We have a system that creates all kinds of barriers of access to folks who are homeless.”

Currently the California State Senate is debating the bill, which is on track to receive Gov. Newsom’s approval before Oct. 10, the last day this year’s legislation can be signed into law. Lisa Murawski, a principal consultant with the State Assembly Committee on Appropriations and the author of the committee’s analysis of the legislation, says no opposition to the bill has been stated formally or informally.

Unhoused people in California usually qualify for Medi-Cal, but Medi-Cal can only be billed inside a brick-and-mortar facility, which the Street Medicine Act would change. Currently, the cost of the Feldmans’ visit to Johnny falls squarely on their employer, the University of Southern California. USC funds its street medicine team with a mixture of its own money, county dollars from Measure H and private donations.

Brett Feldman says he spends time fundraising he could spend providing care and that a single team costs $600,000 annually, including expenses for direct service providers, medicines, lab work and supplies like shoes and clean socks for patients. Each team can see around 400 patients per year, according to Feldman, meaning the county could treat most of its homeless population with around 150 teams. A spokesperson for the Los Angeles County Department of Health Services and its Housing for Health division declined to share how many street medicine teams it funds or their funding sources, however, saying Housing for Health is “relatively new” to street medicine and its leadership board was uncomfortable discussing specifics. Christina Miller, president and CEO of Mental Health America of Los Angeles, which deploys a county-funded street medicine team in Long Beach, says at least one team exists for each of the county’s eight “service planning areas,” or SPAs.

Some SPAs host multiple teams. The Venice Family Clinic runs nine street medicine teams on the Westside of Los Angeles. Director of Community Programs and Advocacy Karen Lauterbach says the Street Medicine Act would not affect the clinic’s funding, however, which does not depend on Medi-Cal for its financing.

But the bill also gives the homeless presumptive eligibility for Medi-Cal, meaning the unhoused have access to Medi-Cal through a temporary program even before they formally apply — an important change, says Lauterbach, because the application process is prohibitively complex.

With presumed eligibility, a team could bill the state for a session from the street and the patient could access her Medi-Cal benefits without the delay of application. Presumptive eligibility already exists for children and pregnant women, says Lauterbach, “because people don’t want prenatal care delayed.”

One Venice Family Clinic patient with a dislocated finger is waiting on Medi-Cal approval to see an orthopedic specialist, says Lauterbach. As the weeks tick by, the injury threatens to become a long-term issue. Contributing to the delay is that “she has some behavioral health issues that makes enrolling her into Medi-Cal challenging,” says Lauterbach, citing a combination of depression, anxiety and disordered thinking. “This is where that presumptive eligibility would be amazing.”

Patients must be referred to specialists through their primary care provider (PCP), but it is illegal for providers to practice outside of brick-and-mortar clinics. The Street Medicine Act would allow medical practitioners like the Feldmans to act as their patients’ primary care providers.

One 75-year-old patient treated by USC Street Medicine checked himself into the hospital for rib pain, then discovered he had lung cancer and advanced congestive heart failure. He badly needed a cancer specialist.

“We called his PCP and asked them to refer him to [an oncologist],” says Brett Feldman. “They said they could not refer him because they had never seen him before.”

Six weeks later, the patient finally had an appointment with his PCP. The challenge then was to get him from his encampment to the brick-and-mortar clinic. Leaving an encampment for a hospital visit risks the seizure of a person’s belongings, either by other people or by the city in a sanitation sweep. It is tantamount to property abandonment.

In other words, California’s state and local governments strike the homeless with a one-two punch. First the state prevents doctors from traveling to the unhoused, so the unhoused travel to doctors.

Then, when they do, California cities take their belongings.

Sweeps frustrate street medicine to such an extent that the Feldmans scan the news for sporting or cultural events coming to Los Angeles, which they fear will lead to large-scale encampment clearances. A housed person probably wouldn’t schedule a doctor’s appointment days before they had to move homes, Feldman analogizes, but the unhoused, in effect, are always several days from moving, whether by choice or under threat of property confiscation.

In the case of the cancer patient, the Feldmans sent a member of their team to take him to the doctor in an Uber. Without the aid of street medicine programs, the unhoused must walk or take public transit, spending money needed for meals.

“It was six hours total from the time our employee picked him up from his encampment to the end of the treatment that day,” says Feldman. “So we lost six hours of pay for one member of our three-member team, just to place the referral we already knew he needed.”

Even if a patient can make it to the hospital, he may not have the identification needed to apply. IDs are incredibly valuable on the street and regularly stolen, so the Street Medicine Act removes ID requirements.

“[If I’m unhoused] I might not have an ID card,” says Kamlager. “Maybe I got caught up in a sweep, maybe my shit got stolen. Maybe I sold it in a trade for something. All those scenarios will preclude me from my own eligibility access. Extending eligibility means living on the street — that street is your address. The doctors are coming to that location.”

The Feldmans end their rounds at El Parque de Mexico in Lincoln Heights, a slice of public space packed with statues of Mexican revolutionaries that sits just across the train tracks from USC’s Keck Hospital, the team’s home base. On the other side of Valley Boulevard, Louis, a heroin user with infected injection wounds in his groin, cannot walk due to the pain of the sores. He crawls out of his tent into a plastic chair for inspection.

The Feldmans and nurse Dulce Barajas unfurl a rainbow blanket to hide Louis from the street. You need to go to the hospital, they insist, now — but Louis, like so many unhoused, harbors a deep distrust of the medical system.

“They just open me up and let me go,” says Louis, implying that the hospital suspects him of drug seeking: faking or exaggerating ailments to score morphine. Mistrust of the medical system is widespread among the unhoused, studies find. Characteristics like “lack of clean clothing, inadequate grooming, bringing survival belongings to appointments, and having advanced and unsightly medical conditions” mean the homeless are frequently treated rudely or as subhuman when they travel to emergency rooms for lifesaving care, according to researchers at the Washington University School of Medicine.

Street medicine may be the only intervention in the cycle of distrust, bringing care out of the brick-and-mortar hospital to the street with no questions asked — and street medics don’t carry morphine. Before unhoused patients at Keck Hospital are discharged, the USC team will pepper them with specific questions about the patient’s preferred sleeping locations and general mobility patterns so they can locate them for treatment.

“Seventy percent of the time we find them,” Brett Feldman says. “It’s like Christmas. Meeting them in the hospital and then finding them on the street is worth, like, 10 street visits [in terms of building trust]. They know the effort.”

“I have to go,” he says, starting to cry. “Joseph always finds me.”

Joseph Becerra is USC Street Medicine’s community health worker, a formerly unhoused man and an expert in tracking down the team’s patients.

“I’ll get there. I’ll force myself,” Louis says.

The street medicine team gets in the minivan, stepping over goldfish dust in its back seats.

“He’s not going to the hospital,” says Barajas.

Even if AB-369 becomes law, Louis would still have to go to the hospital to treat his wounds. But street medics hope the Street Medicine Act will expand their presence in Los Angeles County and make interactions with medical practitioners more common, beginning the process of rebuilding trust with the unhoused. Maybe then Louis would not mind going to the hospital so much.

For now, it’s afternoon in El Parque de Mexico. Feldman eases the minivan away from Louis, then heads over the train tracks toward the hospital the patient fears