She was suffering on the streets of Santa Monica. Here’s what it took to rescue her 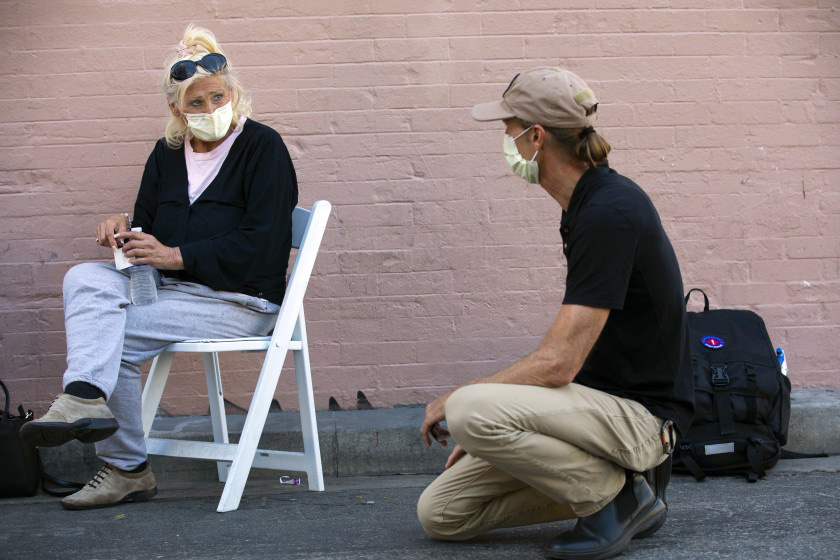 Coley King, who practices street medicine for the Venice Family Clinic, wasn’t frightened by the angry and disoriented woman at Wilshire and Lincoln boulevards in Santa Monica, who was chucking her belongings in all directions.

“My usual approach is to give some distance,” said King, who studied the homeless woman’s behavior from afar before approaching.

She was limping badly and teetering on the curb, and King feared she might tumble into the path of speeding cars. The doctor conferred with his traveling companion, outreach worker Katie Holz, and moved closer. He recalls the woman continuing “to throw a fit” for a while, tossing a flashlight and backpack in his direction, but then the anger began to melt away.

Her name was Suzanna, and she was in her mid-50s, living on the streets with a combination of mental health and addiction issues. Over coffee and doughnuts, Suzanna told King about the hip surgery she’d recently had and a bit about her mental health history.

Suzanna also told King that he appeared to her to be spinning about, as if trapped in a tornado.

King is a physician, not a psychiatrist, but more than a decade of visiting homeless encampments offers an education you can’t get in school, and he has learned that it’s often better to provide help as soon as someone agrees to it than to write a prescription that may never get filled. He carries anti-psychotic drugs with him, and after a series of questions about her medical history, he asked Suzanna if she’d like him to administer an injection, right then and there, that might help relieve her hallucinations and other symptoms.

That was in late June. A week later, he returned with another, longer-lasting dose of the same medication, and again she agreed to the treatment.

When I met with Suzanna a few days ago, it was at a Venice hotel, where she has been given temporary housing. She is living a new life, filled with dreams rather than despair. She said she feels “immensely” better and would be moving soon into her own apartment.

I’m sharing Suzanna’s story because in a county with 60,000 homeless people, three or four of whom die each day on average, it’s just so good to hear about a successful intervention.

Last week I wrote about a homeless woman after Silver Lake residents alerted me that she was often naked and disoriented, and that she had been seen crawling across Sunset Boulevard, in grave danger. After the column ran, I heard from readers, as I often do on this topic, who said that if she was known to be using drugs and creating disturbances, police should have put a stop to it, and that if she was mentally ill and needed help, she should have been picked up and committed for psychiatric care.

I understand that frustration in a region where sprawling encampments and full-blown mental breakdowns are a common sight, and I do believe that in some cases, involuntary commitments are the only way to save lives. The woman in Silver Lake, by the way, was hospitalized and remains in treatment.

But there’s a tendency to think that simple solutions exist for a human catastrophe with a thousand different causes. And it would be a mistake to assume that simply medicating or arresting people can be a panacea. Suzanna’s case, in fact, is a study in how much work is involved in rescuing someone.

Long before King met Suzanna, she was on the radar of an outreach team of social workers, psychiatrists, nurses and mental health specialists from city, county and nonprofit agencies. Holz, who introduced King to Suzanna, was the leader of that team, and she’s employed by the People Concern, a full-service provider of housing and mental health services. Holz told me that the team began working with Suzanna back in March.

So what does that mean? It means they began to establish a relationship with Suzanna in an effort to earn her trust, and that meant going back again and again, offering coffee or conversation or a measure of hope. For many people, including those with severe mental illness, there’s often a better chance of lasting recovery when the person chooses to get help rather than having it forced on them.

“She was comfortable talking to us, but she didn’t want any mental health services,” said Holz.

Some people lack insight about their own mental problems, but there is often more to it than that. They understandably may not want to be carted away, separated from belongings or friends, stigmatized and reminded of terrifying previous commitments or arrests. Holz said reaching some people on the streets can be difficult because they fear being compelled to do something against their will.

“With Suzanna, we had to make it very clear to her that we weren’t going to force anything on her,” said Holz. “For her and everyone else, the biggest thing is choice — here are the choices, and here are the possible outcomes.”

A few weeks after the team met Suzanna, she took them up on an offer of a temporary room in a motel, thanks in part to help from St. Joseph Center, which has been managing Project Roomkey shelters during the COVID-19 pandemic. Even then, there was a long road ahead. Suzanna tossed things around her room and got kicked out. Back on the street, she took a hard fall and ended up in the hospital with a damaged hip.

When Holz’s team saw her back in her usual haunts, the engagement began all over again, and when she appeared to be deteriorating, the call went out to King.

“To be honest, Coley is magic with our clients sometimes,” said Holz, noting that his unintimidating appearance might be an advantage. With his long hair, schoolboy backpack and Australian Redback boots, King doesn’t look like a doctor.

“He looks like a regular guy from Venice,” said Holz, adding that King is “honest and straightforward” with patients.

In time, the combination of medication, team support and another shot at shelter made it possible for Suzanna to turn things around. Even though it took a few months, that’s faster than the norm, according to Holz. It helped, she said, that because of the pandemic, more beds were available through Project Roomkey, and efforts to reel vulnerable people off the streets were stepped up countywide.

On Wednesday, I met up with King at the Venice Family Clinic, which just celebrated 50 years of serving the needs of low-income residents with limited healthcare options. We walked several blocks to Suzanna’s hotel, where she was waiting for us, along with Holz.

Another thing I often hear from readers is judgment about homeless people — they’re addicts, they made bad choices, they refuse help, they don’t even want to help themselves. Hitting rock bottom does involve some wrong turns, for sure, but often it also involves losing a job or a home, some form of trauma such as abuse or assault, untreated physical and mental disorders and heartbreak of a hundred varieties.

Suzanna told me she studied dance back East, became a showgirl dancer in Las Vegas and South America, studied nursing, had one marriage go under, then lived a pretty good middle-class life for a while with her second husband, until he got cancer.

“I went into a tailspin,” she said of her life after her husband died 12 years ago, in his 40s. They were living in Texas, and “everywhere I looked, I saw him,” so she moved to Las Vegas, where she gambled away money, leaned on alcohol and cocaine and became homeless. She later moved to California, where she had lived earlier in her life and still has some family, though no one she wanted to impose upon in her declining state.

Suzanna told me she has been diagnosed with depression and bipolar disorder, but medication didn’t bring much relief. Now, she says, she has kicked her addictions, the meds are helping, and she’s feeling pretty good, no small thanks to Holz, King and the others who were there for her.

She told me she loves animals and wants to go to school to become a veterinary assistant.

“I never give up hope,” Suzanna said. “Something good’s going to happen, so giving up hope, that’s not me.”