LA County Hospitals Were Told To Stop ‘Dumping’ Homeless Patients, But Their Options Are Limited 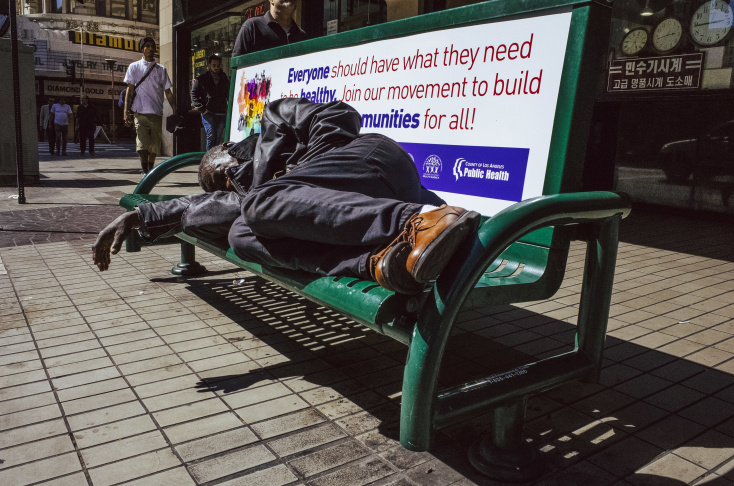 For years, videos of ambulances dropping patients off on street corners prompted outrage and, eventually, legislation to stop it. But California hospitals attempting to comply with the new law run up against this stark reality: There are not enough beds available for homeless patients exiting hospitals.

“We have 60,000 people in Los Angeles without a home, and we certainly do not have 60,000 shelter and recuperative care beds for them,” said Kelly Bruno, president of the National Health Foundation.

Last year, former Gov. Jerry Brown signed SB 1152. Its key provision requires hospitals to make sleeping arrangements for patients who are homeless. The goal is to provide a “warm-handoff” between the hospital and a homeless aid group or shelter, so that the patient doesn’t return to the street.

The law also requires hospitals to:

It took full effect on July 1, and hospitals that fail to comply can be criminally prosecuted.

But it’s easier said than done. Across Los Angeles County, only about 8,153 shelter beds are available on any given night. Recuperative care beds — beds in a facility designed for homeless patients who need medical care and a place to heal, but not full inpatient care at a hospital — are also insufficient to meet the need, Bruno said.

Her organization operates three recuperative care facilities with a total of 100 beds in L.A. and Ventura counties.

“I mean, quite honestly, we could probably open 10 more of our facilities, and we would still have a waitlist,” Bruno said.

L.A. County is building recuperative care “villages” at each of its public hospitals. But those roughly 400 total beds are not scheduled to be fully open until 2021, according to a June presentation given to the L.A. City Council’s homelessness and poverty committee.

The difficult task of trying to find a place for a homeless patient upon discharge falls to people like Brigid Donahue. Donahue is a licensed social worker at a hospital in central Los Angeles. Donahue said the hospital she works for is doing its best to comply.

“I’d love to tell you and everybody that patients from any hospital who are homeless get to go right to a shelter or stay in a comfortable hospital bed until they can find a shelter, but it doesn’t always happen like that, unfortunately,” she said. “It’s just kind of an impossible system, the way it’s set up in Los Angeles.”

What Happens When There’s Nowhere to Go?

The biggest dilemmas happen after regular business hours or on weekends, when shelters and other care facilities are typically closed for intake.

“Sometimes the doctor will say, ‘Yeah, okay, fine, stay until the next day or through the weekend,’” Donahue said. “But that’s not always appropriate, or necessarily a good stewardship of hospital resources.”

Even if hospitals do find a bed for a homeless patient, the patient doesn’t have to accept it. Los Angeles’ disparate network of homeless shelters is notorious for being dirty and dangerous. Last year, KPCC published an investigation on the poor conditions that lead to thousands of beds going empty every night. In response to the reporting, Los Angeles County passed health and safety standards for homeless shelters and began inspecting them.

“Just because someone is homeless doesn’t mean they’re not a human,” Bruno from the National Health Foundation said. “They don’t want to sleep in a room with 75 cots where their things get stolen. So they’d rather sleep in an encampment, which is basically a community where they can say, ‘I have friends, and I’m safe.’”

How Hospitals are Trying to Solve the Problem

At the same time, the reality of the new law is prompting hospitals to think creatively about what to do with patients, said Anita Zamora, deputy director of the Venice Family Clinic.

“From our perspective, it’s really encouraging to see the different hospitals collaborating very closely. They’re not operating in silos, and they’re learning from each other,” she said.

Like Donahue, however, Zamora said finding an after-hours bed is a challenge. She said some service organizations have partnered with specific hospitals to avoid this, but there’s little consistency across the region.

“All of us have some degree of extended hours, but we’re not necessarily always there to do the in-person warm handoff or even ready to receive the call,” Zamora said.