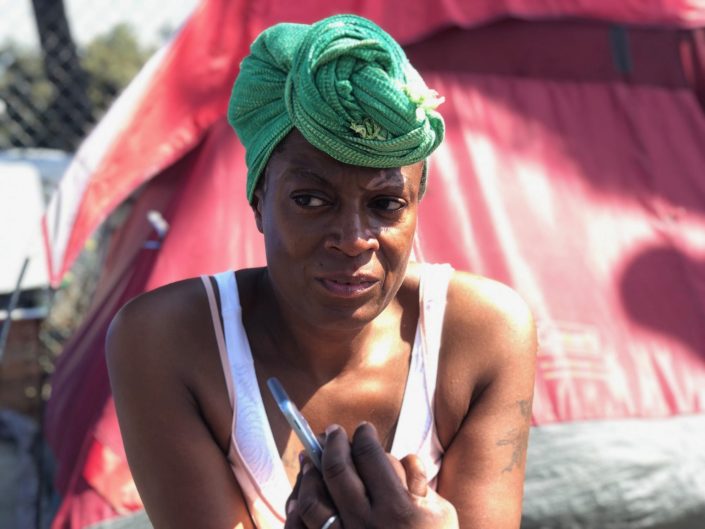 Dr. Coley King of the Venice Family Clinic is one of a growing number of medical professionals making house calls to people who are homeless.

Instead of trying to powerwash the problem away, California’s hospitals, public health departments and homeless service organizations are increasingly sending trained health practitioners into homeless encampments in a quest to improve health outcomes for individual homeless people.

“Western medicine is very much built around the ideal care for the ideal patient. Most of these folks are not in the ideal situation,” said King. “We can make some compromises that still do good medical care and get them to a very good average. It’s better to take half of your medicine than none of your medicine.”

One late September day, King makes a “house call” on Shawnda Thornton, a homeless woman in her late 40s living on the sidewalk across the street from a Silicon Beach tech campus in Venice.

“OK, how are you feeling now on these medications?” he asked her.

“I love these medications because I’m not tired. I don’t have to sleep all day. I can walk around and manage myself just like I used to,” she responded.

Thornton has congestive heart failure, and September is the first month this year that she hasn’t been hospitalized.

The goal King has for Thornton is to ensure she has access to ongoing medical care that keeps her out of the hospital. He thinks a lot of the public discussion that revolves around California’s crisis of homelessness misses the individual people who are physically deteriorating because they lack shelter.

Life On The Streets Is 30 Years Short

The most comprehensive study of mortality on the street available comes from Boston. It found that two of the three most common causes of death were heart disease and cancer.

Los Angeles County, the epicenter of the state’s homelessness crisis, is expected to see more than 1,000 people die while experiencing homelessness this year. Last year the number was 921. In Orange County in 2018, it was 210; San Francisco, 135;. Sacramento, 132.

Distinct from the plainly human toll, the amount of money spent on the medical care of the sickest homeless people, many who eventually die on the street or in the hospital care, is mind-bogglingly high.

An 2016 study found that L.A. County spent nearly $400 million in one year on its so-called “frequent flyers” -— the 5% of the homeless population in poorest health who most frequently cycle through publicly operated institutions like jails and hospitals. A RAND estimate placed the individual cost per person for another particularly sick study group around $38,000 annually. Neither of those estimates include insurance costs typically paid out by the California’s Medi-Cal program.

“We all sort of end up on this seemingly never ending merry-go-round together, and no one feels good about it,” said Feldman. “The ER provider who’s seen the same person five times in the last five shifts, recognizes wholeheartedly that the plan that they have is not going to work, the patient is going to come back, and around we go again on the merry-go-round.”

The logistics of how street medicine teams are funded and deployed varies from county to county. In the case of Los Angeles, county agencies dole out grants to free clinics, hospitals, and contracts health providers directly to provide street outreach. Hospitals and other foundations also offer to fund programs too. On a typical weekday, L.A. county officials say there are 38 outreach teams of doctors, nurse practitioners, physician assistants and mental health professions out working.

But the process to do so has been complicated after objections from local hospitals. They argued in an August 2019 letter to CalOptima that not including private hospitals in the planning process would inevitably hamstring the effort.

The health system first proposed the project after learning that three-quarters of the 210 homeless people who died in Orange County in 2018 were enrolled in CalOptima.

The Street Is No Place To Heal

The challenge for CalOptima is the same confounding public health officials across the state; How do you get quality medical care to people who neither have shelter, money, nor (typically), transportation?

According to advocates, street medicine is a first step to proactively including people in a health care system that otherwise excludes them until the last possible minute. Dr. King says street medicine is a start, but what he really pines for is the ability to write a prescription for a patient for a housing unit with affordable rent.

“My novel intervention for all the illness that comes with chronic homelessness would be affordable housing,” said King. “But right now, I’m left with trying to give good health care to these folks, trying to find them, engage them and make them welcome in my clinic.”

As for his patient, Shawnda Thornton, when it comes to getting off the street, she’s actually doing better than most. After more than three years of waiting, she obtained a Section 8 housing voucher. Her challenge now is finding a place to use it. While she’s had several appointments to meet with property managers, she hasn’t been able to because she’s been so sick.

“Every time I had an appointment, I would be in the hospital,” said Thornton.

Which means now her voucher is close to expiring, Dr. King’s job is to make sure she stays on her meds, stays out of the hospital, and has time to actually find a place where she can heal that isn’t a red nylon tent.

“You can work on it, it’s certainly a place to start working. But to fully heal out here, I don’t think it’s possible,” Thornton said.