Homelessness is a Public Health Crisis 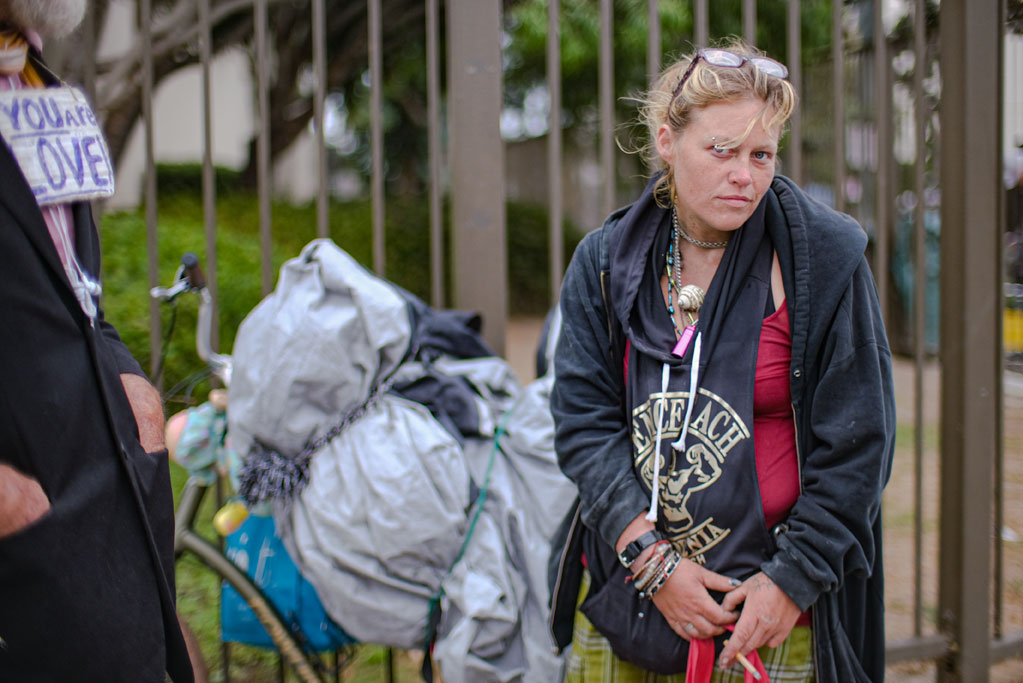 Originally published in The Argonaut on October 9, 2019

This article was produced as a project for the USC Center for Health Journalism’s California Fellowship.

They’re found under freeway bridges, on sidewalks, benches, hillsides and the beach.

Others wind up in alleys and parking lots, while the lucky few spend their last days or hours in hospitals.

But they almost always die alone.

Deaths of the unhoused on the streets of Los Angeles have jumped a staggering 76% over a five-year period, according to a Kaiser Health Foundation analysis gleaned from Los Angeles County Coroner’s office data, and the city is quickly moving toward unprecedented territory with nearly 1,000 deaths of homeless people this year. Causes of death are myriad: exposure to the elements while sleeping outdoors, various untreated illnesses, accidents, suicides.

The life expectancy for women in California in 2016 was 83 and 79 for men — among the best longevity statistics in the nation. In Los Angeles County, the average age of death for homeless people was 48 for women and 51 for men.

A surge in homeless deaths coincides with an increase in the number of people who are chronically homeless or avoid shelters, which means more people are living on the streets longer with serious physical and behavioral health issues, experts say. To save lives, some doctors are practicing medicine on the streets.

Medical professionals from Venice Family Clinic operate nine street medicine teams on the Westside. These include the Homeless Multidisciplinary Street Team in Santa Monica, which works with the chronic homeless, and the C3 Team (City, County, Community), which does outreach in Santa Monica and Skid Row. The Homeless Multidisciplinary Street Team treats illnesses and physical conditions that without immediate care could become more serious and even life-threatening.

Dr. Coley King, the director of homeless health care at Venice Family Clinic, says building trust among the homeless population is crucial because so many have been promised things that never come to fruition.

“We try and get people the best medical care possible wherever they are,” King said. “Out here, it’s rare that we find a patient who doesn’t have a chronic health condition.”

On a mid-September home visit to formerly unhoused client Robert Crawford, King asked Crawford a series of questions about his health, checked his blood pressure and heart rate.

Crawford, 56, wearing blue jeans and a black Rod Stewart T-shirt, mentioned that he had constant chest pains and had fallen and hit his head against a wall the night before.

“I think you better go to the hospital. We can take you right now,” King said.

After Crawford agreed to go to the hospital with King’s team, doctors at Providence Saint John’s Health Center in Santa Monica diagnosed him with pneumonia.

George Kirkland sweeps up around his tent, Encampment residents must remove their belongings ahead of city cleanup efforts each Friday

Clint Cooper, 62, spends much of his day at Christine Emerson Reed Park (formerly Lincoln Park) in downtown Santa Monica. A C3 Team visited him one day in late September to make sure that he was picking up his heart medications. When Cooper said he couldn’t make it over to social services center Step Up on Second in Santa Monica to get his medication, street team member Katie Holtz offered to get it and bring it to him at the park.

“I’m on blood thinners and beta blockers. I have a couple of stents in my heart.  But I haven’t had a heart attack in two years,” said Cooper, adding that he would not be able to pick up his medication without the C3 Team.

“My problem is transportation. They bring me my medication when I can’t get it myself,” he said.

The same C3 Team later visited a man from Riverside, Kevin DeMarco, sitting on a bench near the beach on the Santa Monica – Venice border off of Ocean Avenue. DeMarco had been complaining for weeks about pains in his abdomen and torso; he said he’s been diagnosed with pancreatic cancer, but King and doctors who work with him are unsure because they don’t have all of DeMarco’s medical records.

Hector Ortiz, a physician’s assistant with the C3 team, says the symptoms that DeMarco presents are similar to pancreatitis, “but we won’t know for sure until we see his records.”

According to the Hirshberg Foundation for Pancreatic Cancer Research, the one-year relative survival rate for all stages of pancreatic cancer combined is 20% and the five-year rate is 7%.

“The doctors here think it’s pancreatitis but it’s not. They don’t have my records. They’re in Riverside County,” said DeMarco, who travels with his light brown terrier named Digger. “I’m in pain every day.”

In the perpetual encampments along Third Avenue in Venice, close to a dozen campers willing to discuss their health talked about various personal aliments such as heart palpitations, sleep apnea, diabetes and back problems.

Ashley Kinsley, 30, arrived in Los Angeles from Arizona last year with hopes of becoming a singer. She spends most of her days on the Venice Boardwalk and her nights on Third among one of the Westside’s largest homeless populations. Wearing a red blouse with pink socks and no shoes, the sunburned and diminutive Kinsley only needs one prompt to display her vocal style — a cross between Bonnie Raitt, a young Joni Mitchell and Rickie Lee Jones, who spent her youth singing in Venice nightclubs.

Kinsley has a number of abscesses in her mouth but is reluctant to go to the nearby Venice Family Clinic because of prior negative experiences with doctors.

“They look down on me in hospitals. I know my body better than a doctor does,” she said.

After prodding from local homeless advocate David Busch, Kinsley made a vague promise to visit the clinic.

George Kirkland was sweeping up around his tent on Third Avenue on a day when Los Angeles Department of Sanitation employees power-wash the sidewalk as part of weekly cleanups. He then began spreading a large amount of rocks on a strip of dirt next to where he pitches his tent.

“Best rat prevention there is. First you pack in the wet dirt with rocks, and then you put the big rocks on top,” explained Kirkland, who is receiving treatment for hepatitis C at Venice Family Clinic.

Business organizations and community activists coexisting near large homeless encampments say the unsanitary conditions often seen in encampments are perfect breeding conditions for rats, and that some rats are carriers of fleas, which in turn carry the virus that leads to typhus.

Health experts are indeed seeing a spike in communicable illnesses such as typhus, an infectious disease that is often spread by rodents. Last year typhus cases soared to 109, 42 more than in 2017, according to the county Department of Public Health. As of Sept. 27 of this year there were 54 cases. According to Public Health, fatalities from typhus are uncommon, occurring in less than 1% of cases, but it can be a debilitating respiratory ailment.

While the number of typhus cases has increased over the last few years, hepatitis A has decreased since the state outbreak in 2017. According to Public Health, there were 80 cases of hepatitis A recorded in 2017, 40 in 2018 and 19 as of April. In homeless encampments there were nine hepatitis A cases in 2017, three in 2018, and three in the first four months of this year.

Despite resistance from many communities, Los Angeles city and county elected officials have forged ahead with plans to bring mobile hygiene stations in an effort to combat the possible spread of communicable diseases. The Los Angeles County Board of Supervisors approved a pilot program last year for hand-washing stations in eight locations throughout the city, and Venice has opened a portion of its restrooms on the beach 24 hours a day so that homeless people living nearby can use them instead of using the sidewalks or residents’ yards.

City officials have also contracted with nonprofits to bring mobile showers to various communities, including Venice, where unhoused residents can shower at least twice a week.

L.A. County Supervisor Sheila Kuehl, who authored the hygiene measures at the county level, says the short-term goal is to help maintain good public hygiene and provide individuals with a sense of personal dignity. But, she added, there is more to these services than just the short-term benefits, considered to be stopgap measures until people find permanent housing.

“Over a number of years, our office has sponsored many Homeless Connect Days where people experiencing homelessness can get an array of services including showers and haircuts, new shoes, a meal, and basic medical and legal assistance,” said Kuehl, whose district includes Venice, Santa Monica and Hollywood. “By engaging people and providing basic services, we initiate relationships that help put men and women on a path to bridge housing and permanent housing. … That is our ultimate goal, because we have learned through experience that the best solution to homelessness is homes.”

Las Vegas, Sausalito, Santa Rosa and St. Louis have all created programs that offer mobile showers to homeless residents. That’s not the case in other cities, how-
ever, where showers or other homeless initiatives often meet with restsistance.

Last year, Ft. Lauderdale and Pompano Beach turned off the spigots of a nonprofit that was offering twice a week showers to the homeless. In 2014 that municipality passed a series of ordinances designed to make it more difficult to feed the homeless.

Local lawmakers have also faced united and vociferous pushback against temporary housing from many communities, including in Venice, where a large group of residents have resisted having bridge housing built in their neighborhoods.

“We have so much unused land in California. The city and state should be building shelters, homes, bridge homes, rehab, mental health, along with basketball courts, gyms, etc., where land needs to be developed. Or just build along the 10 Freeway between L.A. and Palm Springs,” says Travis Binen, a software executive and Venice homeowner.

“Build where it’s inexpensive and makes economic sense, where it won’t attract more transients, and where it won’t endanger hard-working taxpayers. For the homeless who are working in L.A., refurbish buildings so they can stay in L.A. The working homeless aren’t the people trashing our streets, assaulting people, doing drugs, etc.”

Some communities and corporate entities are embracing opposite solutions to reduce homelessness.

The Silver Lake, Echo Park, Los Feliz, Atwater, East Hollywood (SELAH) Neighborhood Homeless Coalition is trying to open a homeless services center in their region. Every first and third Saturday of the month, the nonprofit’s volunteers visit encampments in the area and hand out water, hygiene kits, toiletries, showers and clothing.

“We were all working in our own communities independently and we really weren’t getting anywhere, so we decided to form a nonprofit and work together,” said board member Dorit Dowler-Guerrero, who works with The People Concern, the Los Angeles Homeless Services Authority, and social services agency PATH Homeless Health Care Los Angeles. “These are our neighbors and we see what we can do to help them.”

King says it takes a toll when he loses patients on the streets, but he feels compelled to do this work.

“The losses are heavy. You have to personalize every goodbye and personally check out with each one of them. Maybe do a little meditation once in a while,” King said. “But this is what I want to be doing. It’s a natural fit for me.”