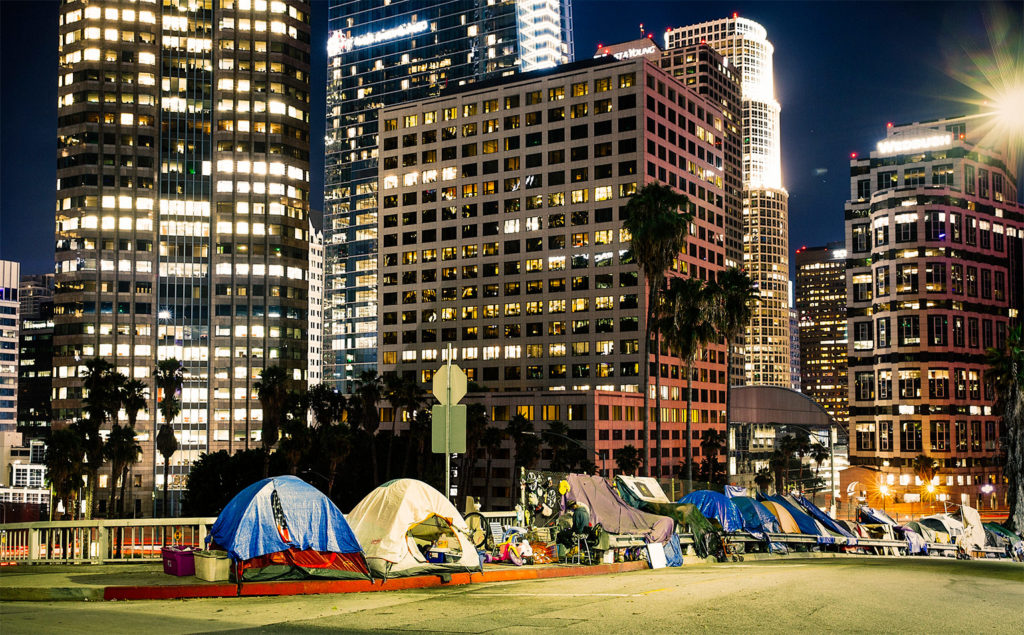 Medical professionals who advocate for the homeless population of Los Angeles have known for years that research shows that opioid overdose is the leading cause of death among people released from jails or prisons. Released prisoners may get clean behind bars, they say, but the medications prescribed in jail detox programs aren’t normally the kind to adequately wean them from their opioid cravings. With the resultant loss of tolerance, if they relapse on the outside one erroneously judged dose can kill them.

Jail officials in Los Angeles County have long resisted administering opioid addiction medications to inmates. But that was before public health officials reported on the alarming rate at which homeless people were dying from drug overdoses in L.A.

Overdose fatalities were the single greatest factor contributing to the rising rate of homeless mortality, according to a study released in late October by the L.A. County Department of Public Health. The increase in the number of overdose deaths, the report’s authors note, was “considerably higher than that of any other leading cause of death in this population.” At 21 percent, drug/alcohol overdose was also the second-leading cause of death overall for homeless people living in L.A. — just one percentage point behind coronary heart disease.

Like everyone else, people experiencing homelessness use drugs for a variety of reasons. And the harsh conditions of an unsheltered life can make it difficult for medical experts to untangle and isolate a specific cause of death. About one in 10 overdose deaths were coded as “alcohol overdoses” in the county’s report.

Asked which classes of drugs account for the remaining 88 percent of overdoses, County Medical Examiner-Coroner Dr. Jonathan Lucas said through a spokesperson that the analysis is not yet complete.

Yet many medical practitioners who treat homeless people hooked on opioids attribute the rise in overdose deaths to one main factor: fentanyl, a synthetic opioid that can be smoked or injected, and is 50 times more potent than heroin, according to the Centers for Disease Control and Prevention.

Dr. Susan Partovi, medical director of the nonprofit Homeless Health Care Los Angeles on Skid Row, has heard stories from homeless patients who report they inject fentanyl instead of heroin. “My harm-reduction method is to ask them, ‘Can you go back to using heroin? Because I don’t want you to die,’” she says.

A countywide shortage of interim housing for the homeless population complicates treatment of opioid addiction, Partovi says. Housing for Health, a county program that provides interim housing for addicts in recovery who are in and out of the hospital frequently, including homeless drug users, has housed thousands of people since 2012. “They’ve done a really good job,” Partovi says. “It’s just that we need more.”

Today, in the nation’s largest county jail system, Los Angeles is expanding its use of medication-assisted treatment. By March 2020, Suboxone and methadone, two federally approved drugs proven to control opioid cravings and reduce the likelihood of relapse and death by overdose, will become widely available to inmates who show the symptoms of physical withdrawal while in custody.

“We’re hoping to see a decrease in drug overdoses once they leave,” says Jackie Clark-Weissman, director of Correctional Health Services in L.A. “We believe that there will be an increase by 1,000 inmate-patients who might benefit from this treatment.”

Years of research suggest reason to believe the embrace of Suboxone therapy will reduce fatal overdoses inside and outside the jails. A similar program at Rhode Island’s corrections department was a key factor in a more than 12 percent reduction in the state’s fatal overdoses in the first half of 2017 compared with the same period in 2016, a study found.

Previously at the county jails, Suboxone was made available only to pregnant inmates and patients with high comorbidities (multiple medical problems that put them at high risk for death). Clark-Weissman says funding concerns prevented the jails from expanding access to the medication.

The about-face on addiction treatment in the jails comes as some medical practitioners worry that more changes are also needed elsewhere.

Homeless deaths from drug overdoses and substance use disorders can easily go uncounted. The county report recommends development of a more systematic approach to identifying and keeping records on the cause of homeless deaths. It also calls for the launch of a formal process to monitor the circumstances contributing to homeless mortality and prevent future deaths.

“It’s not always easy attributing substance-use disorders to a cause of death,” says Rebecca Trotzky-Sirr, medical director of urgent care at L.A. County-USC Medical Center, which has one of the largest and busiest emergency rooms in the country. “A person can die from liver failure after years of drinking alcohol. Or have heart disease that came from a prior history of smoking methamphetamine, even when they have not used in a long time.”

Substance abuse can also contribute to other leading causes of death, such as homicide, suicide and motor vehicle accidents. As Dr. Barbara Ferrer, director of the Los Angeles County Department of Public Health, pithily summarized in testimony to the Board of Supervisors, “Homeless people are in fact dying at a higher rate because they’re homeless.”

“There is absolutely more fentanyl in this region now than there was, say, three years ago,” says William D. Bodner, Special Agent in Charge of the federal Drug Enforcement Administration’s L.A. field division. Bodner says that fentanyl is cheap (at $10 to $15 per tablet), dangerous (a dose of three milligrams can be fatal) and relatively easy to produce (usually in clandestine labs in Mexico using chemicals from China).

Fentanyl-related deaths in L.A. have been increasing steadily since at least 2016, confirms Dr. Doctor Gary Tsai, interim director of L.A. County Dept. of Public Health’s division of Substance Abuse Prevention and Control. Tsai credits the high concentration of substance-use treatment resources in L.A. for treating tens of thousands of county residents and keeping opioid abuse from reaching the crisis levels seen in other parts of the country.

Outreach teams funded by the landmark voter-approved homeless-service sales tax Measure H engage people living on the streets and connect them to housing and supportive services like medical care. Over the summer, LAC+USC Medical Center became one of several dozen California hospitals that offer treatment 24/7 for people hooked on opioids, including Suboxone-assisted detox therapy.

On the other hand, Los Angeles-based doctors and nurse practitioners who treat homeless addicts say that autopsies are not always conducted following fatal overdoses and that data found in death certificates and coroner’s investigation files can be incomplete, which can turn the monitoring of homeless mortality into a guessing game. Much of the most current information they have is anecdotal evidence heard from patients.

A 29-year-old homeless man with a 10-year heroin habit told me that opioid overdoses in L.A. are becoming “an epidemic.” Dominick (who gave me permission to use only his first name) carries fentanyl testing strips, which he uses to test his drugs — heroin, cocaine or methamphetamine — for fentanyl. “I’m very precise,” he says with a self-deprecating smile.

He says opioid overdoses, once considered infrequent in Southern California, have become a distressingly regular occurrence here, and claimed that a childhood friend of his from the San Gabriel Valley town of Glendora has overdosed five times in recent months from injecting fentanyl; two other friends with whom he uses drugs have overdosed at least twice during the same period, he says. “The majority of people OD’ing on it don’t know they’re taking fentanyl.”

Dr. Karen Lamp, associate medical director of the Venice Family Clinic, says she has received reports from the clinic’s street-outreach teams suggesting opioid-related overdoses may be increasing in local encampments. A year ago, Lamp began hearing from patients in an opioid treatment program at the clinic that they were smoking fentanyl after relapses.

“We’re holding our breath a little bit because fentanyl is starting to show up here in California,” Lamp says. “I think the public health department is bracing themselves for this. I think they are picking it up on the street, through arrests and things.” (Attempts to interview officials from the Los Angeles Police Department for this story were unsuccessful.)

Santa Monica police spokeswoman Sergeant Erika Aklufi says that while methamphetamine arrests have as much as tripled in the past couple of years, any increase in fentanyl-related overdoses in the beachside community was “negligible.”

“We’ve been lucky,” Aklufi says. “It may show that our homeless population differs from areas of the county that have more drug services and a sicker population that’s coming through.”

Law enforcement officers from LAPD, the county sheriff’s department, and incorporated cities like Santa Monica are equipped with Narcan, a nasal spray which can reverse the effects of opioid overdose.

Last year, the California Department of Public Health began paying for needle exchanges to distribute fentanyl test strips. But though the test strips help identify the presence of fentanyl in the street drugs, county health experts say they are not fully reliable since manufacturers of fentanyl can produce chemical analogues that may result in false negative screenings.

Another problem is that standard urine and drug toxicology tests are unable to reliably detect many compounds of fentanyl. Fentanyl has a stealth quality to it that can make it difficult to identify and treat in patients.

“We’re probably underreporting the level of [fentanyl-related] activity,” says Carrie Belin, a nurse practitioner who treats homeless patients at the Saban Community Clinic in Hollywood. “The people manufacturing the drugs are moving much more quickly than we have the technology to keep up . . . I think the worst is yet to come.”