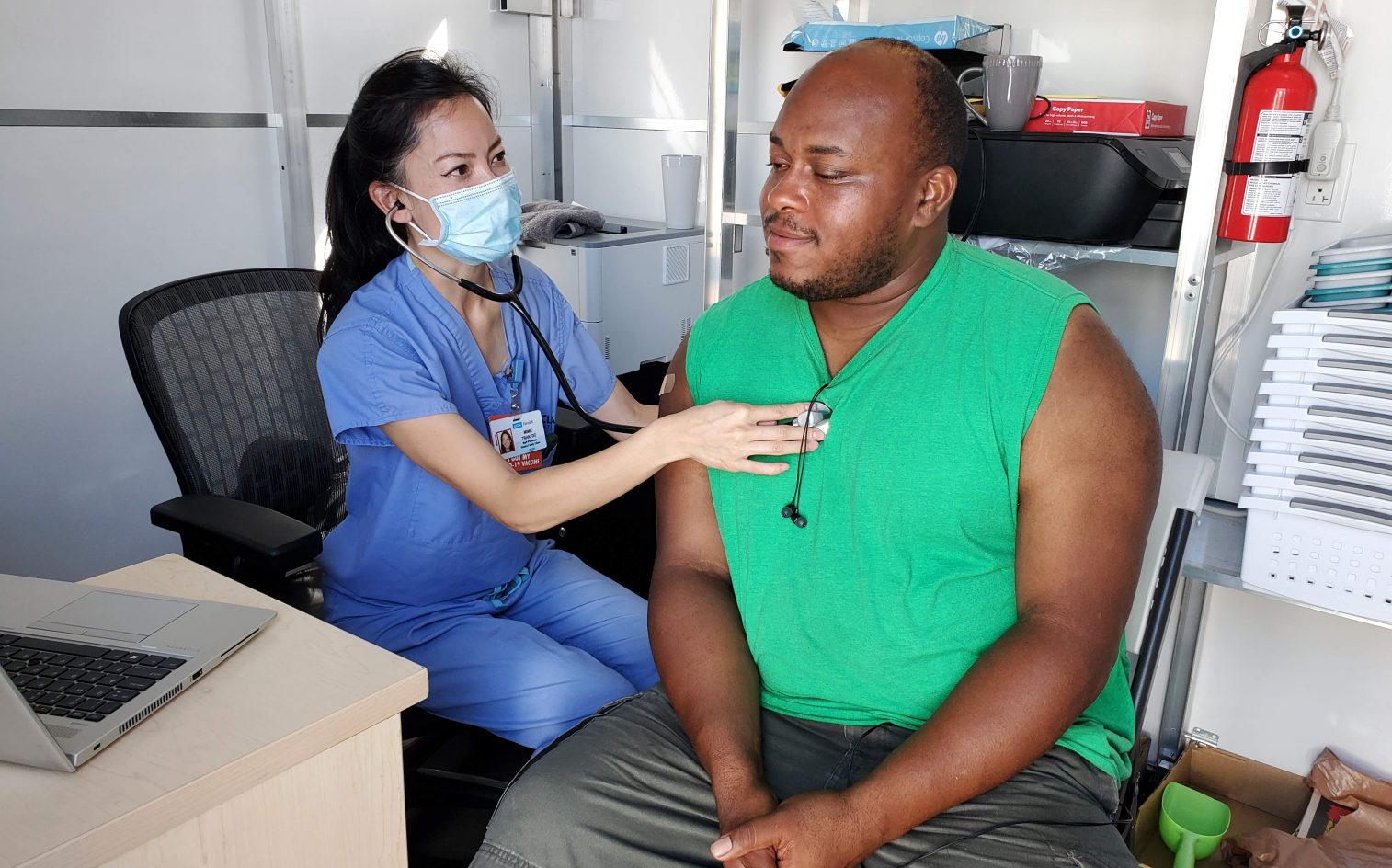 Originally published in the Daily Breeze

When Deric Hawkins was living on the streets in Torrance this summer, he said, he believed he had about five years left to live.

Hawkins, who was homeless for 10 years, had reached a point of mental and physical pain where he thought things would never get better. Then he was offered a spot at Torrance’s Tiny Home Village.

“I’m going to have a new life now after moving out this week,” said Hawkins, who is 35. “Things are so much better than I thought they would would ever be.”

One of the big turning points for Hawkins, he said, was access to high-quality medical attention from the Venice Family Clinic doctors, who visit the village on a weekly basis.

“I understand that some of my mental problems that I was having were mostly health problems and a lot of things are clearing up,” he said. “I was stressed, I was anxious, depressed, irritated. But I’ve been working on my health and all the things I thought were never going to to get better are.”

When Hawkins was on the street, health care was an afterthought, with safety, food and shelter taking priority, he said. Now, the village takes takes care of those needs and gives him the resources necessary to focus on his mental and physical health.

“I think for a long time, he felt like things were hopeless, but having a stable space to settle and regroup and the support from staff here that visits that are really kind and then having a health exam and link to mental health services,” said Dr. Mimie Tran, one of the doctors who visits the the village regularly, “I think that’s been a big help in stabilizing him as a whole (person).”

Venice Family Clinic has been a leading provider of free health care in Los Angeles since its founding in 1970. It serves around 40,000 patients annually. And following its merger with South Bay Family Health Care in November 2021, it is now also a leading provider in the South Bay.

The clinic is a pioneer in delivering medical care to unhoused individuals living in encampments or on the streets. The mobile clinic at the village is an extension of Venice Family Clinic’s street medicine program and relies on the same principles of compassionate care, meeting individuals where they are, building trust, and having no judgment, Tran said.

In Hawkins’ case, Tran was able to prescribe medicine for his high blood pressure, help him shift his diet in response to blood work that indicated indicated he was pre-diabetic, and refer him to the clinic’s behavioral health services for his mental health needs.

Hawkins is one of 25 Tiny Home Village residents enrolled with Venice Family Clinic, which provides services such as check-ups, STD testing, diabetes screening, substance use treatment and referrals to specialists.

The village’s and clinic’s services have also been instrumental in changing the lives of Michelle Tyson, her younger son, Johnny, and her dog, Ruffles, who were all living in a Torrance park prior to moving into the village.

Tyson, who is a Stage III colon cancer survivor, lost her job during the pandemic because of her vulnerable immune system, she said. In May, she lost her apartment and then, in June, she lost her eldest son to gun violence.

“It’s very good to be in here, it’s better than being out on the streets, especially with the rain. It’s really good to have somewhere to laydown down and go to sleep and be warm and not wet,” Tyson said. “It’s a blessing.”

Tyson is able to monitor her blood pressure with help from the clinic’s doctors and get healthy meals she can digest, despite her intestinal issues, from Harbor Interfaith. Her son has been able to access treatment for his severe asthma. Now, they are both focused on finding permanent housing.

Based on its long history of success stories like these, Venice Family Clinic is focused on expanding its street medicine services and in March, launched a curriculum to train more doctors to deliver medicine to homeless clients.

In the program, doctors learn social-emotional skills for gaining patients’ trust, as well as how to deliver care to patients who might be experiencing mental health, physical health and substance use issues all at once.

The curriculum was developed by Dr. Coley M. King, VFC’s director of homeless health care services, who has been providing street medicine for decades. Tran and the other VFC doctors who visit Torrance’s Tiny Home Village have completed street medicine rotations as part of their medical training.

VFC currently delivers street medicine at several large encampments in Los Angeles and plans on expanding its outreach in the South Bay in the coming months, Evonne Biggs, program manager for homeless services and health equity, said in a written statement.