Doctors’ new tool to treat homeless people: A medical clinic in a van 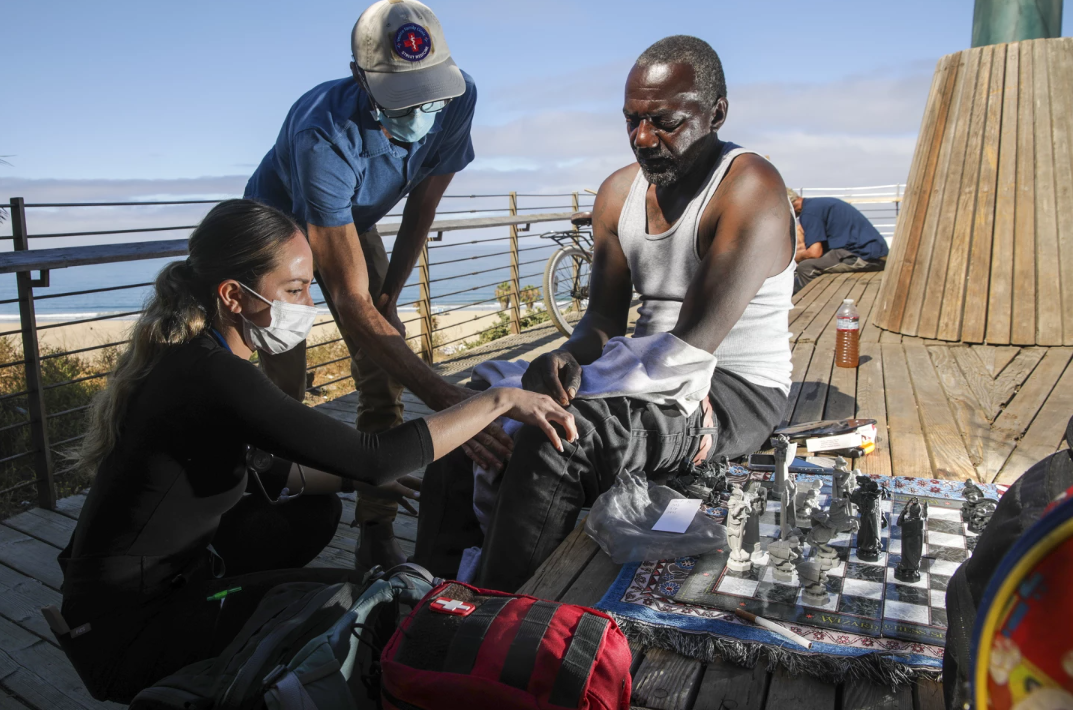 On a scorching afternoon, Lisa Rogers peered out from the shade of a tree on a sidewalk in Hollywood and spotted a white RV-type vehicle with the words “Saban Community Clinic” on the side.

She had never seen a clinic-on-wheels in 20 years of homelessness, and decided to see if she could get help there for a painful rash.

With mobility issues and schizophrenia, Rogers, 44, rarely sought out medical treatment, even though she had a host of serious health problems.

She was exactly the type of person that the new mobile clinic and lab is trying to reach.

For several years, medical clinics have been sending teams of doctors, physician’s assistants and nurses into Los Angeles streets to treat homeless people whose only other option is the emergency room. Now some of them are expanding those teams with vans and RVs equipped with medical chairs, equipment and lab space to offer patients a more professional and private setting. The goal is to bring continuity of care for a population notoriously difficult to keep in treatment for chronic conditions such as diabetes, heart disease and mental illness.

Saban started its street medicine program in 2017 and last month acquired its Ford 550 diesel with a clinic retrofitted much like an RV.

The rolling clinic is expected to broaden its outreach significantly.

Rogers arrived pushing a wheelchair and breathing heavily as the medical staff greeted her warmly. “I can’t walk too much,” she said, sitting in her chair.

“I am all messed up,” Rogers chuckled.

It had been months since Rogers had seen a doctor. She was still scarred by an experience at an emergency room three years ago.

“I almost died of a drug overdose,” Rogers said. The doctor had to cut a hole in her neck and insert a tube to provide an airway where her windpipe was obstructed — a procedure called a tracheostomy. But after she was saved, she said, the doctor never closed the hole, leaving her with an embarrassing hiss.

She broke down in tears describing it, as the hiss grew louder with her sobs. She has been fearful of hospitals ever since.

Samantha Kumpf, a physician assistant, inspected Rogers’ rash, tested her for STDs, checked for lice in her hair, and gave her pills for diabetes and inhalers for her asthma. She said she would try to find a specialist who could close the hole in her neck and that she needed regular visits for her chronic medical problems.

There are at least a dozen mobile vans operating in the county today, with plans for more in the works, according the Community Clinic Assn. of Los Angeles County.

The Venice Family Clinic, another nonprofit community clinic, has been delivering healthcare to homeless people on the streets since 1985 and launched their transit clinic in January 2021.

“It was an expensive idea and we didn’t have anyone to copy,” said Dr. Coley King, the clinic’s director of homeless health. “I was nervous how it will turn out.”

The experiment proved successful, he said, and is helping change the methods of street medicine in L.A. County.

The mobile clinic, arriving at the peak of COVID’s most lethal surge in L.A. County, couldn’t have come at a better time.

“Homeless people were having much more difficulty in getting into medical buildings, the transportation was limited and they were in a mentality of being sheltered in one place” to avoid getting the disease, King said. “That was an important time to deliver healthcare services to people where they are. We were able to help people out when traditional healthcare systems were struggling to meet their needs.”

While emergency rooms can provide healthcare of last resort, they are often distant, can have unbearable wait times and are not designed to treat chronic problems.

“They can get judged for how they dress or for their substance use,” she said. “It discourages the homeless people from visiting the emergency rooms.”

In the rare case they have decent insurance to see private doctors, it is cumbersome to take all the belongings and get to the office. “When you are living on the streets, you are focused on other aspects of survival,” Kumpf said. “You don’t have the mindspace to get a health checkup.”

Saban, a nonprofit health center, began in 1967 as the L.A. Free Clinic as a movement emerged to provide free drug treatment, medical care and showers to hippies living on the streets, indigent residents and other uninsured people. As the homeless population skyrocketed in the 1970s and 1980s, the L.A. Free Clinic built a relationship through its shower program. It was renamed Saban Clinic in 2008 after billionaire Haim Saban, who donated $10 million.

Several of the mobile clinic’s patients this recent afternoon had not visited an emergency room for months, if not years.

“Ailments like diabetes can’t be detected unless you voluntarily get examined,” Kumpf said. “Therefore, it is important to reach out to them where they are. We build relationships with the people we treat. It helps with follow-ups, considering that patients need recurring examinations.”

Robert Stennis, 45, has been Saban’s patient for about a year, came to treat his sore foot, and Kumpf greeted him with a grin.

“They know my medical history,” he said. “They interact with me. It feels like they are on my team.”

“We are on your team,” Kumpf echoed, examining his foot.

She then took his blood pressure, which was higher than expected. “Have you been taking your medicines?” she asked.

“No,” Stennis conceded. “I have been extremely stressed out.”

He’d been in a transitional home for three years and wanted out, he explained. “I understand,” Kumpf said.

Stennis said he hated the years where the emergency room was his only option for healthcare. “It is like they want to get rid of you,” he said. “They don’t even explain how the pills work. They don’t care. I get more personalized treatment at Saban.”

But it can be difficult to keep track of patients, as they move around or lose cellphones — and people still fall through the cracks.

About three months ago, Kumpf met a homeless woman who had been sexually assualted. “She was traumatized,” Kumpf said. “I helped her with the tests. I treated her wounds. I helped her file the police complaint.”

The woman promised to call the doctor the next day but never showed up after that. Her phone had been disconnected. The police never heard from her either.

“I hope she is OK, wherever she is,” Kumpf said.

The last count of 2020 had reported that about 66,000 people were experiencing homelessness in Los Angeles County. A Times analysis of survey data from the annual homeless count found that the prevalence of mental illness or substance use could be as high as 67% — two of the biggest and most common impediments the street doctors have since most homeless people need long-term treatment.

“They are disorganized and paranoid because they have faced a lot of trauma throughout their life,” King said. “It’s challenging to earn their trust and communicate with them. It can take anywhere from two seconds to two years for them to open up.”

In December 2020, King spotted Felix Graciani, 35, camping on Malibu beach and in a state of psychosis. The two interacted but King soon lost track of Graciani when he moved.

Months later, the outreach team spotted Graciani in Santa Monica, and the two reconnected. “First couple of times, he wasn’t interested in talking to us,” King said, driving the mobile van up to the Incline Park in Santa Monica, where Graciani was camping. “Today, he was OK spending some time talking to us.”

Bare-chested, smoking a hand-rolled cigarette while getting his blood pressure checked, Graciani said he had been homeless for “as long as I can remember.”

“I don’t know where my family is,” he said. “I am into music. I wrote a song the other day and kept it under the palm tree. But someone took it.”

King told him that someone died of a drug overdose in the park the night before.

“It is very scary,” Graciani said.

“Keep this with you,” King handed him a packet of Narcan, the antidote for opioid drugs. “If you see someone overdosing, give it to them and call 911. It could save their life.”

“For sure, doc,” Graciani said.

Despite the warning about opioids, the most common drug found on the streets is meth, King said.

“It seems to be affordable, long lasting and powerful,” he said. “It is directly toxic to the brain and the heart. It disrupts sleep cycles. It can cause psychotic illnesses and severe mood swings. It [affects] multiple parts of the system, contributing to making really poor decisions.”

Graciani said he didn’t use meth but had serious mental illness. “He has been willing to get psychiatric help,” King said. “But he has trouble taking all of his meds every day.”

King planned to give him antipsychotic pills, which could later be replaced with a once-a-month shot. “If he accepts the pills, we will give him the injection,” he said. “That way, he won’t have any pills to lose. We have a chance to get him much more organized for housing.”

Housing is a critical component of healthcare, King said. “Just being safe and indoors improves someone’s health quite a bit,” he said.

Lack of housing is precisely what works against Rogers.

Before she left the Saban mobile clinic, Kumpf asked her for a phone number, but she didn’t have one. She asked how they could remain in touch, and Rogers pointed to a palm tree on the sidewalk.

But in the weeks since, the mobile clinic returned to the sidewalk several times. Rogers was gone. All Kumpf can do is keep an eye out as they drive around Hollywood and hope to get her back into treatment.