As America races to vaccinate against COVID-19, line jumpers and racial disparities in distribution emerge 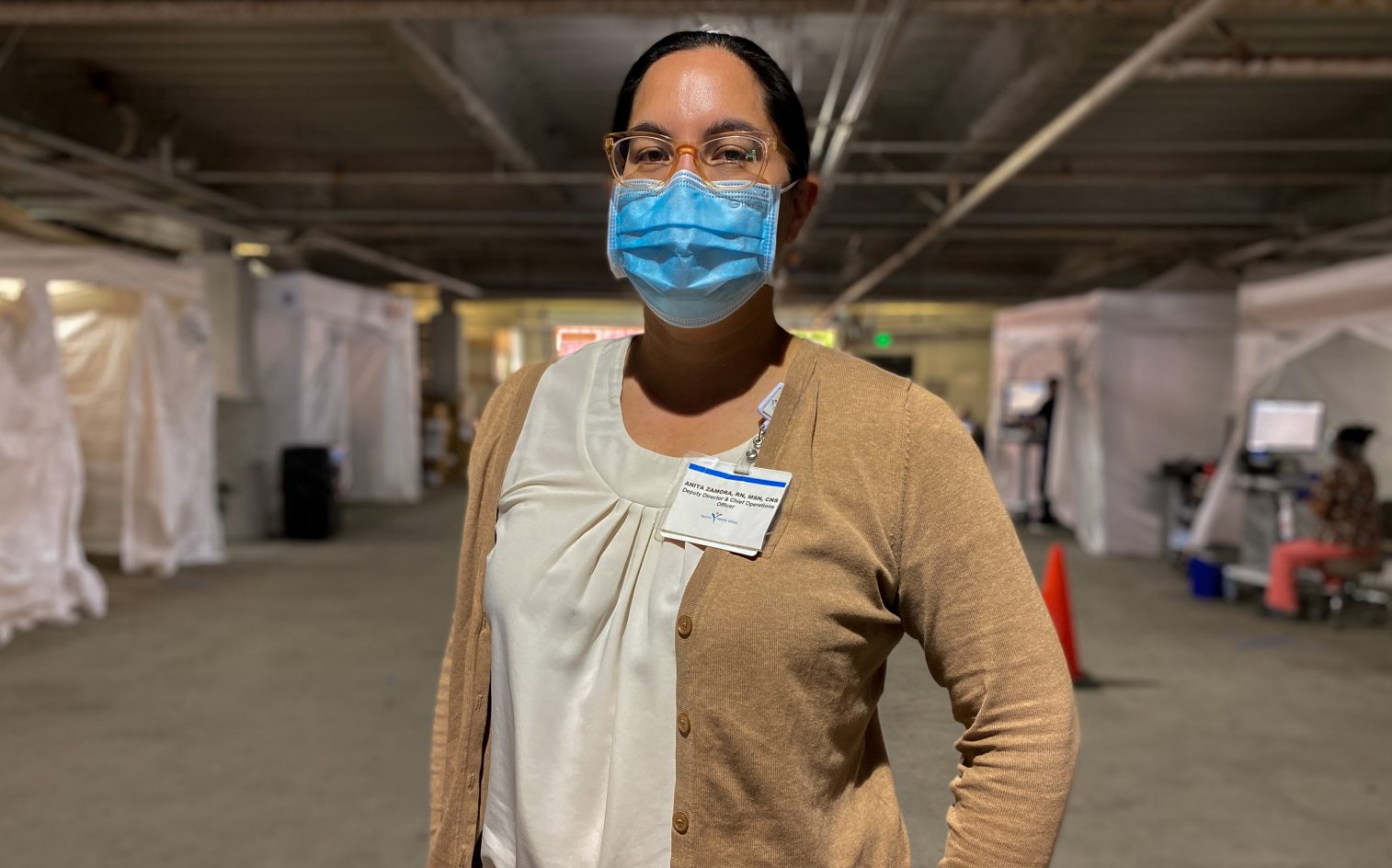 Bobby is one of the lucky ones in the majority black and Latino Los Angeles neighbourhood of Vernon Central.

The 55 year-old proudly shows off the band-aid still fresh on his arm from his COVID vaccination.

“I just got it yesterday,” he told the ABC.

Only one in every 27 people have been vaccinated in the area, despite a staggering one in five having contracted COVID-19 over the past year.

Travel a little further north however, and those numbers flip.

In the neighbourhood of Bel Air, a majority white community where median incomes are around five times the average in Vernon, topping $US200,000, one in four people have been vaccinated, while one in 24 have had coronavirus.

It’s a pattern playing out not just in Los Angeles, but across the whole country, leading to concerns poorer Latino and black communities are being left behind in the race to get vaccinated.

That’s despite these very communities being hardest hit by the pandemic.

Nurse Anita Zamora, who is the deputy director of community health service Venice Family Clinic, says there are “big disparities” in the vaccine numbers.

“Across LA County, we’re seeing that the vaccines are going to more affluent areas, and it is not necessarily those who are hit hardest by the pandemic,” she said.

Coronavirus cases began surging in California in December and January. Around the same time, researchers identified a new strain of the coronavirus circulating in the state, now dubbed the California variant.

Eric Vale, director of molecular pathology at Cedars-Sinai Medical Center in Los Angeles, says his team stumbled across what he calls their “homebrew variant” while doing research into whether the UK variant had arrived in the state.

“Correlation doesn’t prove causation,” he said in response to a question on whether the surge in cases was caused by the California variant.

Instead, Dr Vail thinks the increase was largely due to a spike following get-togethers over Thanksgiving and Christmas.

“But what we do think is that [the variant] helped to increase the magnitude of that surge.”

Cases have begun to decline more recently, but California still remains the state with the highest number of COVID-19 deaths, at more than 50,000.

But as the surge in cases highlighted the need to vaccinate the country’s most vulnerable first, reports of people trying to jump the line began to emerge.

In one case, white Americans raised eyebrows in DC when they turned up at a community clinic, which serves mainly black Americans, to get the jab.

Then there were the two women who dressed up as seniors in Florida to try to get in before people in their age bracket became eligible.

There was also a scam in LA where access codes meant to be used by people in disadvantaged communities were being shared among people far outside those populations.

Attempts have been made to rectify each of these situations, but so far it’s largely been a game of catch up and trial by error.

It’s also not a uniquely US problem. In Canada, a wealthy Vancouver couple were found to have chartered a private plane to an isolated community in Canada’s Yukon so that they could get shots intended to protect vulnerable Indigenous elders.

Why are there disparities in vaccination rollouts?

Bobby, who cares for his elderly sister, didn’t have too much difficulty getting a vaccine appointment.

He’s scheduled to get his second dose in a few weeks’ time.

“I mean, it takes patience.”

But others in the community say they haven’t been as lucky. Some are still in the dark about the process.

“We haven’t got any news about it, nothing,” one young man told the ABC.

“We haven’t seen any clinics offering it or anything”.

Ms Zamora doesn’t think “overt racism” is at play, but she believes a solution has to be found to make sure those who need the vaccine most are prioritised.

The reasons for the uneven distribution are manifold.

Many of Ms Zamora’s clients are essential workers in places like grocery stores. They can’t just step away and get online to try and book an appointment when slots become available.

Some are homeless, while others are elderly and have no-one to drive them to mass vaccination sites.

There are also those who can’t navigate the internet much at all.

It has meant that, in general, educated professionals are more easily able to access the system and secure vaccinations.

People put on hold, unable to use computers to get appointments

After getting the vaccination at the Venice Family site, Dora Aleman told us how she had difficulty securing an appointment.

The 65-year-old says before the clinic called to say they had a slot for her she’d been fighting very hard to try and get an appointment with other providers.

“They would leave me on hold waiting for a long time and they never answered me,” she said.

Ms Aleman, who is a cleaner from El Salvador, had trouble trying to book an appointment online through the centralised My Turn portal.

“I did attempt it, but since I still don’t understand everything about computers very well and all of that, I wasn’t able to,” she said.

Despite her work having dried up a lot because of COVID, Ms Aleman still works one or two days a week. She thinks that’s how she picked up the virus late last year.

“It was pretty bad because I felt shortness of breath and like a pressure in my chest and a cough and a headache,” she said.

After taking a selfie with the nurse who carried out her appointment in Spanish, Ms Aleman said she was glad she pushed to get the vaccine.

“I feel happy and blessed by God because I managed to get it,” she said.

But not everyone feels as she does, with some opting not to get the vaccine.

‘More people dying and in a disproportionate way’

A lack of faith in authorities has been one factor in why some people choose not to get inoculated.

In some cases that’s driven by historical precedent. There are deep-seated fears for many, which have their roots in the infamous Tuskgekee study in the 1930s, when black men in Alabama were used as human guinea pigs in a study of untreated syphilis.

Vernon Central resident and former LA county security officer Anita Davis is emphatic that she won’t have the vaccine.

“Thank God I haven’t had it honey!” she exclaims.

Ms Davis says she has type 2 diabetes and the vaccine is “not safe for me,” although admits that her doctors didn’t specifically say that was the case.

Ms Zamora says “vaccine hesitancy is definitely something to consider” as part of the vaccine inequity issue, especially as recent polls show roughly a third of Americans are not going to get the vaccine or are planning to wait.

But Ms Zamora says there’s “not as much as you might expect”. Instead, she is more concerned about securing more doses for her community.

The clinic is typically getting a couple of hundred vials of the Moderna vaccine each week, but she wants that allocation to be increased for community operations like hers, which she says directly reach the people who need it most.

If that doesn’t happen, she says, the consequences are clear.

“More people dying and in a disproportionate way.”

Health equity is a key focus of the Biden administration, which has set up a COVID-19 health equity task force.

But Ms Zamora says the disparities in distribution being seen across the country are proof a lot more work needs to be done.

“Really figuring out how to make more fair, equitable distribution is kind of a test for us as a society,” she said.