$339,000 for a restroom? L.A. politicians balk at the cost of toilets for homeless people 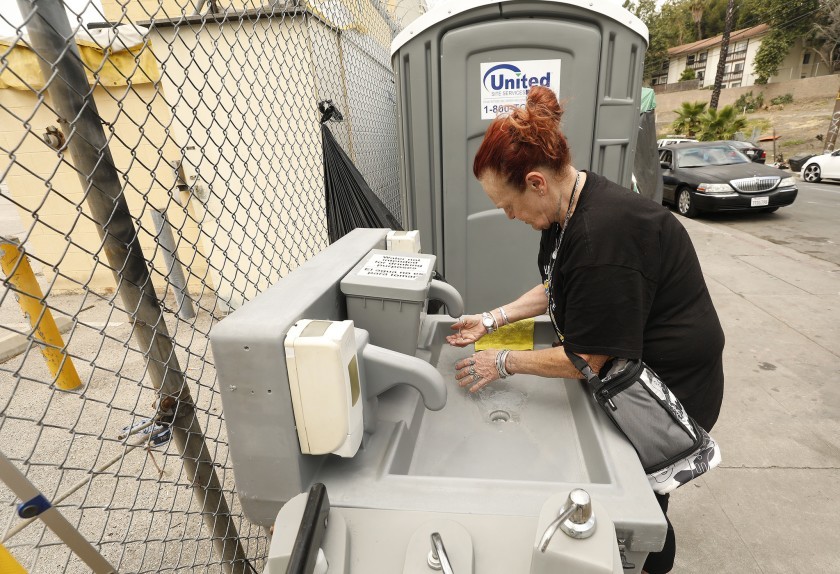 It seems like an obvious fix to the squalor and stench as homelessness surges on Los Angeles streets: more restrooms.

“How many single-family homes could you build for that much money?” Councilman Paul Krekorian asked at a hearing at City Hall last month, saying that L.A. had to find a cheaper solution.

The heartburn over the price of bathrooms comes as the number of people living on the streets has surged. The Los Angeles Homeless Services Authority recently reported that the homeless population grew by 16% in the city this year, reaching more than 36,000.

Two years ago, a report from homeless advocates found that people on skid row had less access to bathrooms at night than Syrian refugees in a United Nations camp. Encampments from Sun Valley to Westchester also were short on needed toilets, L.A. County officials found.

As of this spring, the city is operating toilets in 16 staffed “pit stop” locations across L.A., from Echo Park to Venice to Wilmington, according to the Department of Public Works.

Nine are portable bathrooms that are being rented and brought in and out of neighborhoods daily. Each includes two toilets — one standard, one accessible for people with disabilities — and a hand-washing station. Seven more, mostly near skid row, are automatic toilets that were installed previously and the city now staffs with attendants.

Homeless advocates want more mobile restrooms near encampments so homeless people can relieve themselves in clean, secure, monitored facilities. Doing so ultimately saves money by averting problems that can become big and costly, said David Busch, a homeless activist who once went on hunger strike in Venice to demand toilets and other services.

He and other advocates rattled off examples: Preventing homeless people from being beaten up while using an unattended restroom and then needing emergency care. Thwarting the diseases and infections that come from waiting too long to urinate or not being able to wash one’s hands.

Having “attended, well-kept toilets and hand washing stations is less costly than when people get typhus, hepatitis A or other serious illnesses,” said Liz Forer, chief executive of the Venice Family Clinic.

A big part of the cost for bathrooms is staffing: To prevent portable toilets from being trashed or taken over for illicit activity, such restrooms are monitored by trained attendants for 12 hours a day at a cost of more than $117,000 annually, according to city officials. Adding administration, toilet rental and other costs brings the price to roughly $339,000.

Running them around the clock would cost more. On the automatic toilets, L.A. spends less because it doesn’t have to rent them. Staffing them for 12 hours daily, plus other expenses, comes to nearly $200,000 annually, according to the city.

At a City Hall hearing last month, Councilman Mike Bonin said L.A. had to find cheaper alternatives “because otherwise … literally we have crap on people’s front lawns and in their alleyways and in encampments, which we then spend millions of dollars cleaning.” He also questioned whether every bathroom needed to be staffed.

When Sacramento weighed options for expanding bathroom access for homeless people, it estimated that day-to-day costs would be lower for several options without an attendant. Building a Portland Loo, a popular model for a nearly indestructible, steel single-stall unit, would cost up to $325,000 to build, but only $25,000 annually to operate around the clock, its analysis found.

But many advocates argue that the costs of staffing a bathroom are worth it.

“If you look at the impact we’re having, it’s not just a toilet,” said Lena Miller, chief executive of Urban Alchemy, a nonprofit that operates restroom programs in San Francisco and Los Angeles. Miller said their bathroom “practitioners” have helped save the lives of people suffering from such things as dehydration and a heart attack.

“You have somebody that’s down there, who represents society, to really be there for people,” Miller said.

San Francisco has been a pioneer in such pit stop restroom programs and now operates them in more than two dozen locations. Most are staffed by Miller’s nonprofit, which helps people who have faced barriers to employment. L.A. is working with the same group.

In San Francisco, the toilets cost roughly $200,000 each to operate annually, depending on the hours, said Rachel Gordon, a spokeswoman for San Francisco Public Works.

That doesn’t include the initial cost of $73,000 to buy each of the bathroom units or a one-time expense of nearly $200,000 for a vacuum truck to service them. Many are open less than 12 hours a day, and running them all night would be “considerably more” — at least $500,000 a year — because they would require two attendants late at night for safety reasons, Gordon said.

In East Hollywood, workers at the homeless services agency People Assisting the Homeless, or PATH, had been calling the city almost daily about the homeless encampments that line the streets outside its Madison Avenue office. But the ensuing sweeps never seemed to keep up with the mounting piles of trash and human waste.

So the agency decided to try something new: Chief Program Officer Tescia Uribe pushed to get a portable toilet stationed at Madison and Oakwood avenues, with help from Councilman Mitch O’Farrell’s office. It is staffed by an attendant who also hands out trash bags, which are hauled off by the same crew that picks up the toilet every evening.

Hector Alfonso II, who lives nearby on Madison, regularly douses the sidewalk with cleaner to stave off the stench. Rats are still a problem — one bit his foot recently, he said ruefully. But Alfonso said the situation is much better now than before the bathrooms arrived.

Uribe agreed, saying that although it’s still too early to evaluate the effectiveness of the effort, “just coming in, it looks so different.”

In neighborhoods lacking such facilities, the foul results have shown up on the streets. In a cul-de-sac in Sherman Oaks that abuts the 101 Freeway, resident Michael Austin recently spotted a flash of white in a tunnel that passes under the highway. It was a wad of toilet paper — and the thing that toilet paper is usually used for.

Austin, whose house is next to the tunnel, hastened to clean up the mess before children walked through after school. “We have to take care of them,” Austin said of the people sleeping along the 101. “I just don’t want it at the end of my driveway.”

In addition to the pit stops, L.A. also runs a skid row ReFresh Spot with toilets, showers and laundry services; pays nonprofits to operate bathrooms and showers at their sites downtown; and funds 24-hour access to a Venice Beach restroom. City officials said they want to expand services but caution that L.A. needs to be mindful of the costs.

“Our No. 1 goal is to get people off the streets,” Deputy Mayor Christina Miller, who oversees homelessness initiatives, said in a recent interview. “We want to make sure that’s what we’re spending the bulk of our energy on.”

Pete White, executive director of the anti-poverty group Los Angeles Community Action Network, was surprised by the costs L.A. officials cited for staffed bathrooms. But he said that temporary port-a-potties would not be appropriate for the ongoing need.

Instead he pointed to another possible option: L.A. is planning to allocate $266,000 to provide bathroom access for homeless people at an existing skid row facility. Staffers at St. Vincent de Paul of Los Angeles said that amount would keep a restroom facility with 13 stalls open weekdays for eight hours a day through June 30, 2021, with the help of four staffers.

Busch, the Venice homeless activist, said the city also should see if it can tap any state funding for its programs. Even if it can’t, he said, clean and safe bathrooms are worth it.

“When we start treating everybody with equal dignity,” Busch said, “that is priceless.”